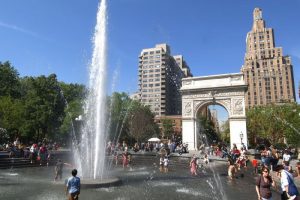 Relax with ghosts at city landmark.

By day, Washington Square National Park is a hub of both leisure and commercial activities. Though small in size, the park “is one of New York’s most densely-used green spaces.”1 Locals can be seen sipping lattes under shady trees, street performers entertaining crowds with their avant-garde acts, chess players musing over boards… and so on

Washington Square National Park – plenty to do in a beautiful setting!

Yet, at night, much darker energy takes over this seemly inviting square in Greenwich Village. Located in what’s considered to be New York City’s most haunted neighborhood, Washington Square National Park has always been active with the paranormal. Since it became a park, many have used it for their own enjoyment, unaware of all the grisly events that once took place in the area.

The park’s haunted history began before New York City even existed. In its early years, the park was the home of the Lenape Indians, who fished from the Minetta Stream and utilized the land’s swampy grounds. Unfortunately, after the Dutch West Indian Company established a trading post nearby in 1624, the tribe was driven out of their settlement. You can be sure their unhappy spirits continue to roam the area.

Another Native American tribe that frequented the marsh was the Iroquois. Many of their members were ceremoniously laid to rest where Washington Square National Park currently stands. The deceased were placed on large scaffolds before being burned with their belongings. According to many people, their spirits still wander the park’s grounds at night. Amid the city’s hustle and bustle, locals have seen the translucent figures of the Iroquois, still fully dressed in tribal gear, drifting beneath street lamps.

After the arrival of colonists, the area in Washington Square served as farmland for many years. From 1634 to 1664, the tract was occupied by freed slaves and became known as “The Land of the Blacks”2. Places where slavery was practiced always have an aura of pain and misery. Then, in April 1797, the area was purchased by the Common Council of New York. The neighborhood was expanding quickly, so the New York City government needed somewhere to conduct its more morbid activities. Potter’s Field became where public executions were held and thousands of people were buried. The hanging tree used during executions, known as “Hangman’s Elm,” still stands on the park’s northwest corner.

Hangman’s Elm has been fascinating historians and drawing ghost hunters to the park for years. Before “executions called for the use of gallows, not trees,”3 many prisoners sentenced to death were hung from its branches. Many stories say if you walk past Washington Square National Park at night, you will see ghostly apparitions still swinging from the tree.

At times, Potter’s Field held up to 20,000 bodies, which included criminals, the poor, the mentally ill, and victims of several epidemics that ravaged the city during the early 19th century. The mass grave’s numbers grew particularly high after a yellow fever outbreak, for instance. The epidemic struck so hard that bodies sometimes were even piled up on the streets! But the plight didn’t end there. Between 1799 and 1860, New York City was again repeatedly struck by disease, this time cholera. The body count at Potter’s Field reached record highs. At the time, the city was one of the few places that did not practice cremation. To ensure that the land could be quickly reused to dump more bodies, corpses were buried in wooden coffins that allowed for rapid decomposition. Of course, this did not prevent the spread of the disease. Infected carcasses contaminated the water supply, for example, so nearby residents would continue to be plagued by yellow fever and cholera.

Over 100,000 people found their final resting place at Washington Square National Park. With a history so riddled with death, no wonder the park is known to be one of the city’s haunted. Reports of paranormal sightings at the park continue to emerge. Young children, garbed in 18th-century clothing, have been spotted among the crowd. Others have seen an eerie, blue fog hanging over the park at night, perhaps vapor from all the dead bodies which lie below. As for photographs taken at the park, strange anomalies often appear in them, including glowing orbs, shadowy figures, even full-body apparitions.

What also continues to surface at Washington Square National Park are bodies and fragments from the soil. “In 1965 Con Edison workers unearthed 25 graves while working on the road to the northeast side of the park.”4 Since then, more skeletal remains have been uncovered. “At one site, 70 to 80 human bones, possibly belonging to two individuals, were found. At a second site, three to four sets of skeletal remains were found.”5

Headstones have also been discovered during renovations. One, which dates back to 1779, was confirmed to belong to an 18th-century Irish immigrant, named James Jackson. “In under a week, it was theorized that Jackson resided at 19 East George Street (the former name of Market Street), and was a watchman and grocer.”6 James Jackson passed away during one of the cholera outbreaks, one year after his child died. 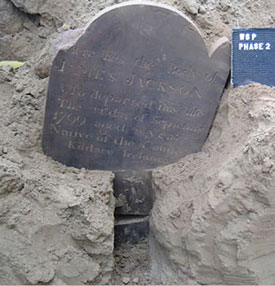 The unearthed headstone of James Jackson.

Before the land began to be shaped into a park in 1849, it was used as the Washington Military Parade Ground. “In 1827 Mayor Philip Hone allowed the city’s Seventh Regiment to use the square as a drill field. They needed more space so the borders of the field expanded to include almost fourteen acres. The field was lumpy and the militia’s heavy artillery sometimes unearthed crushed coffins and skulls, so the bodies on the top were exhumed and reburied elsewhere.”7

As a city landmark, Washington Square National Park is also famous for its architectural elements, especially the iconic Washington Centenary Arch. The arch, a work of architect Stanford White, was built in 1889 to commemorate the centennial of George Washington’s inauguration as president. It was “fashioned after the Arc de Triomphe in Paris.”8 Other notable structures at the park include several fountains, an impressive monument of the Italian general and politician Giuseppe Garibaldi, and two statues of George Washington. As for more recent and modern additions, a “second phase”9 of changes added a dog walking path, a plaza for chess-playing, and a performance stage to the park.

Ghosts can be spotted at both the park and its neighboring New York University’s Washington Square Campus. Many students have come across ghosts in the school’s haunted halls. One of the campus’s most active sites is the Elmer Holmes Bobst Library, which was completed in 1972 and lies at the park’s southern edge. 70 Washington Square South was where many students, probably too stressed with their studies, took their own lives. In the past decade, at least nine students have committed suicide at the library. In separate 2003 instances, two students jumped from inside the building to the hard marble floor below, for example. Then, in 200910, student Andrew Williamson-Noble leapt to his death from the tenth floor. Williamson-Noble was described to be haunted by ‘depressing thoughts”11, despite his outward happy demeanor. In fact, suicides began to happen so frequently that at the school that management had to install “digitally-inspired, perforated aluminum screens in an effort to prevent”12 them. 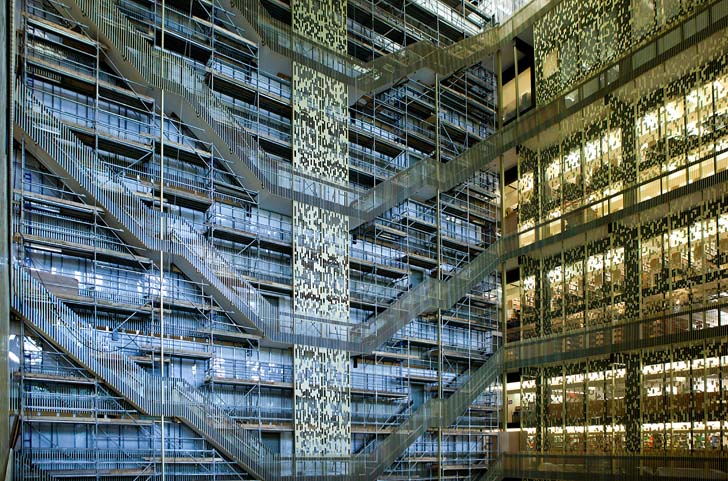 Apparently, dead students still maintain their studiousness at the school. People often hear strange sounds, like the rummaging of papers, in the library. Others have seen the ghost of an old librarian walking through the building, before suddenly vanishing. Voices and breathing sounds have also been heard at Bobst.

Indeed, if you are ever in the Greenwich area, you will certainly experience something supernatural. The next time you’re relaxing in Washington Square National Park, keep in mind that you are hanging out with both the living and the dead! 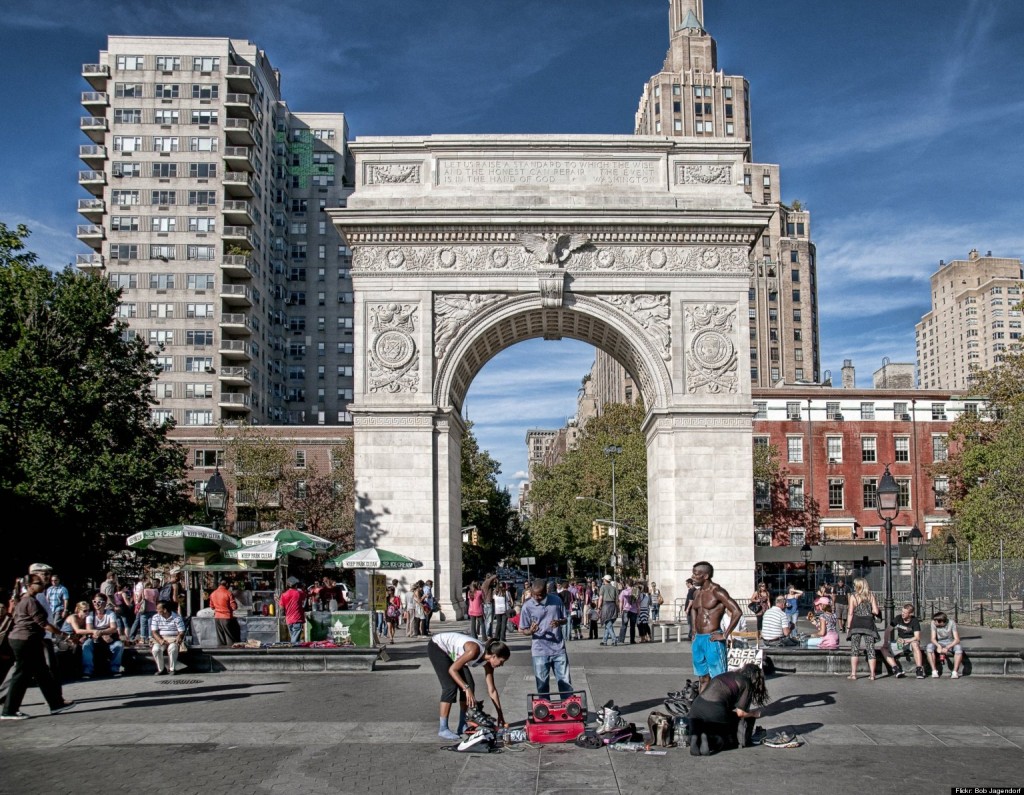