Typhoid Mary; her history, her passions, her secrets, her crimes, and her ghosts.

HOME » BLOG » HAUNTED STORIES » TYPHOID MARY; HER HISTORY, HER PASSIONS, HER SECRETS, HER CRIMES, AND HER GHOSTS.
Posted by blogger in NY Ghosts 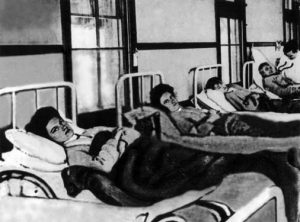 Mary Mallon, also known as Typhoid Mary, was a cook born on September 23, 1869, whose claim to fame and infamy is widely known thanks to a Marvel Character and a rather odious slander. Mary, over the years, has become the poster child for disease carriers and immoral wickedness, to the point that her name has become a placeholder for death and virulence. Today, we’re going to investigate the tragic and cursed life of Typhoid Mary; her history, her passions, her secrets, her crimes, and her ghosts. 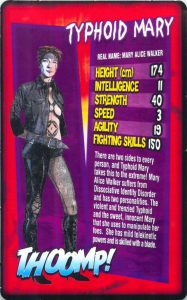 Mary’s claim to notoriety stems from the fact that she is believed to have infected 51 people, three of whom died, with typhoid fever. She was the first person in the United States recognized as an asymptomatic carrier of the malady. Mary’s fame doesn’t come from her genetic predisposition for the disease, nor the fact she was an unwitting host of the virus, but instead it grows from her egocentric and irresponsible disregard for other people’s lives.

There’s Something About Mary

Mary Mallon was born in 1869 in Cookstown, County Tyrone, in what is now Northern Ireland. She immigrated to the States in 1883 in search of opportunities and the ever-elusive American Dream. Mary, a teen by then, moved in with her aunt and uncle and began her life-long career as a personal cook for wealthy families.

From 1900 to 1907, Mallon’s life seemed like a fairytale retelling of Julia & Julia. Mary served as a chef in the New York City area for seven families and was the toast of the town; her dishes, pardon the pun, were to die for.

In 1900, the first red-flag concerning Mary’s unusual biology went up; inside two weeks of her employment, homeowners of an affluent Mamaroneck family developed typhoid fever.

In 1901, the situation repeated itself in Manhattan. Members of the family she cooked for developed fevers and diarrhea. The family laundress died in that outbreak. Mary started to see a pattern, something was off, and she knew the common denominator was her. She fled the region after 7 of the 8 people of the household become gravely ill.

For years, Mary scored a ragged slice across the region infecting household after household. Her M.O. was as followed: Mary would swing into an idyllic neighborhood, find steady work in a rich manor and within two weeks to a month, everyone that tasted her treats would develop crippling symptoms. Districts that were utterly sanitized and disease-free would suddenly be plunged into a state of virulent pandemonium.

In 1906, one of the afflicted families hired a typhoid researcher named George Soper to study their strange malady. Soper had a degree from Rensselaer Polytechnic Institute in 1895 and a Ph.D. from Columbia University in 1899. He was also the controlling director of the American Society for the Control of Cancer. But, more importantly, Soper was a researcher with an almost Holmesian quality; he loved medical puzzles and had an uncanny ability for detecting patterns.

On June 15, 1907, in the Journal of the American Medical Association, Soper wrote:

It was found that the family changed cooks on August 4. This was about three weeks before the typhoid epidemic broke out. The new cook, Mallon, remained in the family only a short time and left about three weeks after the outbreak occurred. Mallon was described as an Irish woman about 40 years of age, tall, heavy, single. She seemed to be in perfect health.

The man in less than 3 months had identified his Moriarty. For a year, Soper tracked Mary down. He followed one outbreak to another, pursued forwarding addresses, trailed victims, and bodies.

Finally, he came upon an active outbreak in Park Avenue and caught Mary, so to speak, red-handed. Two of the servants were hospitalized, and the daughter of the family had just died of typhoid fever. Soper cornered Mary and told her his theory. Mary, in turn, knowing that her livelihood depended on her ability to interact with others, rejected all requests from the doctor to run studies on her. She adamantly denied his advances and continually turned him down.

Soper needed a smoking gun or, at the very least, some quantifiable evidence to get the authorities to act. He compiled a 5-year history of Mallon’s employment and used his findings to expose her.

In 1907, after Mallon published his startling evidence, the New York Health Inspector – pressured by the public and media attention – determined that Mary was an asymptomatic carrier. Under sections 1169 and 1170 of the Greater New York Charter, Mallon was kept in confinement for three years at a clinic located on North Brother Island.

It was during this time, that the media began calling her “Typhoid Mary”.

Ultimately, Eugene H. Porter, the New York State Commissioner of Health, concluded that folks that were unwitting virus vectors shouldn’t be kept in isolation against their will. Mary was released on the condition that she would stop working as a cook and take sensible steps to prevent transmitting typhoid to others.

Mary Mallon was given a job as a laundress. After unsuccessfully making a living through this medium, she changed her name to Mary Brown and slowly gravitated towards her old profession.

For 5 years she continued to spread, now deliberately, Typhoid fever across New York. Whenever an outbreak flared up, Mary simply flew the coop. Soper, meanwhile, seeing the writing on the walls and deducing that Mary was up to her old tricks, sounded the alarm and started to hound her down. Mary Mallon and George Soper were caught in manhood mentality; a repeating loop akin to Tommy Lee Jones and Harrison Ford.

In 1915, Mallon started another major outbreak, at Sloane Hospital for Women in New York City. 25 were infected, and two died. This time, with the help of Sloane and impressive police deployment, Mary was finally arrested.

She was forcefully quarantined on North Brother Island on March 27, 1915. Typhoid Mary was until the day of her death trapped in this hospital; over 23 years.

Mary died on November 11, 1938, from pneumonia at the age of 69. A post-mortem found evidence of active reproducing typhoid bacteria in her gallbladder. Mary, it seemed actually produced the bacteria in her system; it was a genetic anomaly. Her body was cremated and her ashes buried at Saint Raymond’s Cemetery in the Bronx.

The Legacy, Hauntings, and Ghosts of Typhoid Mary.

Today, “Typhoid Mary” is a colloquial expression for anyone who, intentionally or not, spreads disease or some other undesirable situation. It is a mark of shame and of villainy. It has become a common term for labeling the undesirable… To the point that Marvel Comics even has a villain named Typhoid Mary.

Supernaturally there are dozens of spots where Mary’s disease-ridden spirit can be seen, hundreds of places she is said to haunt.

The Raymond Cemetery, where her ashes were buried, has countless tales of a wandering specter, matching Mary’s description spooking tourists and visitors.

The corridors of Sloane Hospital for Women are said to be inundated not only with Mary’s ghosts but with the restless dead she herself caused; the two fatalities her final act of irresponsibility produced.

Finally, Mary’s ghost, along with countless other spirits, demons, and creatures of nightmarish proportions, call the North Border Island their home. Located in New York City’s East River between the mainland Bronx and Rikers Island, this place of blighted land has had multiple atrocities baked into its makeup. It was for a time the site of the Riverside Hospital, a clinical unit crafted handling infectious diseases and isolating victims of if. And if that wasn’t enough, The island was also the site of the wreck of the General Slocum, a steamship that burned on June 15, 1904. More than 1,000 people died on it, and plenty of their bodies washed ashore an inundated the Island’s coastline.

One of the tall tale signs that you are in the presence of Mary’s phantom, many have claimed, is its power to wreak biological havoc on your system. Folks that have felt the presence of Typhoid Mary’s ghost have experienced a sudden onset of fever-related symptoms; hallucinations, abdominal pain, weakness, headaches, vomiting, diarrhea, and red-spots flowering like mad over their chest.