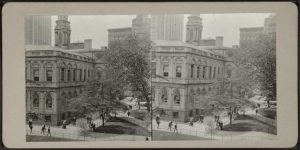 The Tweed Courthouse, otherwise known as the Old New York County Courthouse, is New York’s historic courthouse located at 52 Chambers Street in the midst of Manhattan. It was built in the typical Italiante-style as most courthouses are. William M ‘Boss’ Tweed, the corrupt leader of Tammany Hall and political machine that controlled the New York state governments, oversaw the building’s construction. The Tweed Courthouse served as a judicial building for New York County and is the second-oldest building in the borough, with City Hall as the eldest.

The building itself has pavilions to the east and west with a large central section and a wing off the south side. It was designed by two of New York’s most prominent architects, John Kellum and Leopold Elditz. The first part of the courthouse was originally constructed from 1861 to 1872. In December of 1861, John Kellum won the commission to build the ‘New County Courthouse.’ He designed it with a rusticated basement, Corinthian-style pillars, and a dome that was never actually built. On the interior, Kellum created classical-style courtrooms and offices and the first two floors of the rotunda. Construction stopped for a brief period when architect John Kellum passed away. After Kellum’s death, Elditz strayed from Kellum’s classical style and incorporated Romanesque architecture, including richly carved stonework. The Tweed Courthouse is now on the Register of Historic Places and is even registered as a historical landmark. With the passing of John Kellum, the building’s corruption was finally brought to the light. The media criticized the project, calling it wasteful and gaudy.

Who Was William M. Tweed?

William Magear Tweed or Boss Tweed was a politician most notable for being the ‘boss’ of Tammany Hall, the democratic political party machine that played an immense role in 19th-century New York. At the height of his influence, Tweed was the third-largest landowner in New York City, an Erie Railroad director, a director at Tenth National Bank, as well as a proprietor of the Metropolitan Hotel. Tweed had his hands in everything, raking money in left and right from all of his business ventures. One can’t forget to mention that he also had holdings in stocks of iron mines and gas companies. The list goes on and on.

Born on Cherry Street on the Lower East Side of Manhattan, Tweed was the son of a third-generation Scottish immigrant. Later in his life, he studied to become a bookkeeper and even started work in his family’s chair-making business. Tweed became a member of the Odd Fellows and Masons and enlisted as a volunteer firefighter in 1848. Back then, the competition was so fierce between groups of volunteer firefighters that sometimes burning buildings would go ignored while the firemen fought on another instead. Tweed soon became known for his violence and was elected the foreman of his firefighting company, Big Six. Pressure from the chief got him thrown out of the crew, but a stroke of good luck hit Tweed when some Democratic politicians who ran the Seventh Ward took notice of his exploits. The Seventh Ward and its members put Tweed up for the position of Alderman in 1850 when he was just 26 years old. He lost that year but won the next and soon after became associated with the ‘Forty Thieves,’ the aldermen and assistant aldermen group who were known as some of the most corrupt politicians in the city’s history. Tweed was elected to the United States House of Representatives in 1852 and the New York County Board of Supervisors in 1858, the same year that he became head of the Tammany Hall. Tweed began to rise in power and was able to appoint his Tammany Hall men to every public office that opened, basically ensuring his continued control. He and a few other members started to bend the books, stealing money from city projects such as the Tweed Courthouse itself.

Corruption In The Courthouse

The corruption that came out of Tweed’s reign was incredible. Illegal forced charges on business owners, bribes, fake attorney certifications; you name it, Tweed dealt in it. The ‘Forty Thieves’ members looked out for one another, and even the Marshals were involved. These men were evading the law and stealing from the public consistently. With Tweed’s new lifestyle came a change in the way he dressed. He began to favor wearing an enormous diamond in his shirtfront, and he also bought a brownstone to live in on West 36th Street, then a very fashionable area. He invested most of his illicit income into real estate, so by the turn of the century, he ranked among the biggest landowners in all of New York City.

Tweed was eventually charged and arrested for his crimes but was released on a million-dollar bail. After his downfall, his supporters and other members of Tammany Hall began to move out of the jurisdiction; perhaps they were afraid the law would come for them next. He was eventually charged with 204 out of 220 convictions and a fine of $12,750 (the equivalent of $280,000 today), as well as a prison sentence of twelve years. He only served one and was released. He was living in the Tombs in New York when the city filed a civil suit against him attempting to recover six million dollars in embezzled funds. Unable to put up the three-million-dollar bail, Tweed was locked up in the Ludlow Street Jail, only allowed home visits. He escaped and fled to Spain, where he worked as a seaman on a Spanish charter ship. The U.S. Government discovered his whereabouts and arranged for his arrest. He was returned to New York in 1876, where in a desperate state, he agreed to testify about the inner workings of the Tweed Ring and Tammany Hall in return for his release. The governor at the time refused to abide by the agreement, and after collecting his testimony, he made sure that Tweed remained incarcerated. He died in confinement on April 12th, 1878, from severe pneumonia.

These days, Tweed is said to still frequent the courthouse just as often as he did in life. He was sentenced right in his namesake courthouse. Tweed has been spotted on numerous occasions by staff and visitors standing in the spot he was sentenced. Even the night watchmen have become so terrified by unexplained noises and apparitions that they refuse to enter the building unless totally necessary. Strangely enough, haunted happenings seem to increase at the Tweed Courthouse whenever political corruption and scandal are in the news. Coincidence? You decide. Have you ever visited Tweed Courthouse? Did you happen to catch a glimpse of the famously corrupt fat cat Boss Tweed?

For more hauntings in the Big Apple, check out our Top 10 List here!