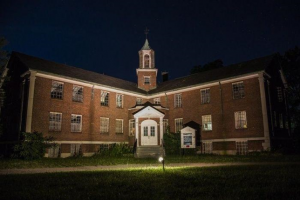 The Empire State of New York is rich with history and is home to some places were legends are immortalized. If you’re a fan of baseball, hit up the Baseball Hall of Fame in Cooperstown. Of course, the guy who apparently discovered it was born in New York as well. With the city that never sleeps to the south and various cities upstate, there is no shortage of hauntings that take place here in New York. In fact, there is one place that is so haunted it became a film series (if you know, you know). And yes, it’s on the list along with 10 other haunted places. Let’s dive into the list to see what you can discover in New York state. 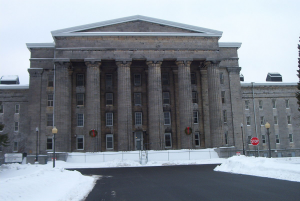 This was the first-ever state-run hospital in the state of New York. Though it was opened in 1843, the hospital that was aimed at treating mentally ill patients was ahead of its time compared to various institutions in the state or possibly anywhere else.

Though it appeared that the patients would be well-taken care of, what happened behind closed doors was something that no one could have ever known unless they have been inside. Electroshock treatments and lobotomies were often performed on patients. The conditions were anything but sanitary and the rooms were small and cramped. One of the facilitators of this hospital developed a cage that was intended to punish any residents who misbehaved or calmed down any patients who may have acted out. This was known as the Utica Crib.

Many people who have resided near the hospital or just passing through have told recollections of faces in the window and frequent screaming coming from the building. Even though the public is prohibited from entering the building on their own accord, the local government will occasionally host tours of the Utica State Hospital for anyone interested in paranormal activity. 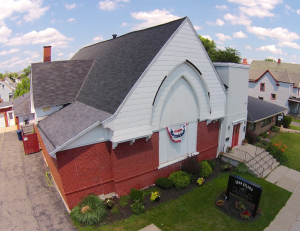 If you are looking for a place where paranormal activity might just be guaranteed to happen, look no further than Buffalo’s Iron Island Museum. At one point, this served as both a funeral parlor and a church. Rumor has it, the ashes of a military vet named Edgar Zernicke had gone unclaimed for years. It was for this reason that his specter might be hanging around the museum. Also, you might want to be on the lookout for any sightings and sounds that may sound remotely like paranormal activity. After all, this was once a funeral parlor. If you are among the crazy brave, you’d be crazy not to check this place out. 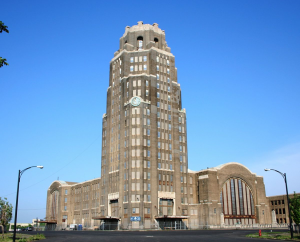 Another place that isn’t too far from the Iron Island Museum is the Buffalo Central Terminal. This train station had ceased operations more than 40 years ago. But even today, some of the people coming and going from the terminal are those who are among the non-living. Some people have recalled seeing the movements of various shadowy figures and even the feeling of being watched by some mysterious figure. One of those spirits is said to be a woman who goes by the name of Rose. The central terminal is run down and looks like it could use some repairs. But that only makes things a lot scarier for a place known for ghostly activity. 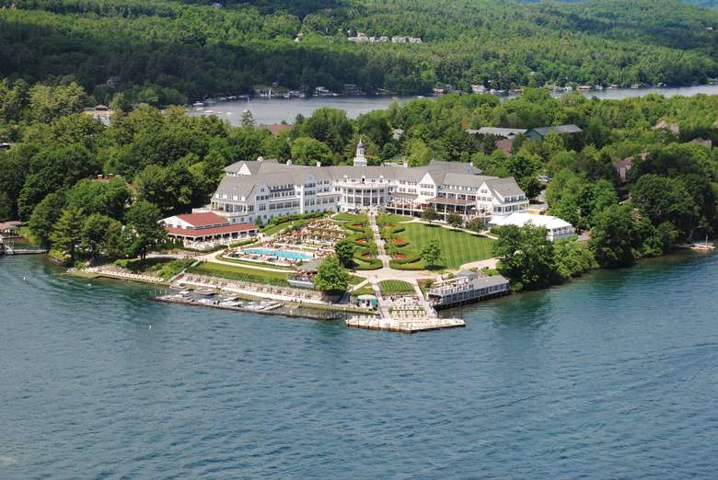 Going across the state, the Sagamore is situated on the shores of Lake George. This is one of the more luxurious hotels that you can find outside of New York City. In fact, the rooms are quite pricey ranging from $200 to $600. If you can swing that kind of money on a place, then you best believe that you’ll be in for a treat of the paranormal kind. Though the building has been around since the 19th century, the ghost stories of the Sagamore are never in short supply. One spirit, in particular, is one belonging to a little boy who died after being hit by a car. The sounds of a child giggling can be heard on the grounds of the Sagamore. 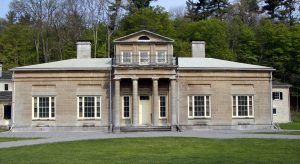 Just down the road from the Baseball Hall of Fame in Cooperstown is the home that was twenty years in the making for a landowner who would soon die just a year before completion. George Clarke did not live to see his dream home come to life. But even in the afterlife, his spirit lives on inside the house. On the property is a crypt that is open to tours on Friday and Saturday nights. The stories of paranormal activity go back to well over a century. The spirit of George Clarke is usually sighted in the windows and the sounds of footsteps can often be heard in the halls. It was rumored that a resident of the house had told a story about sheets being yanked off the bed. A house with paranormal activity with a crypt on the property? Yep, you can expect this to be quite the haunting adventure for you. 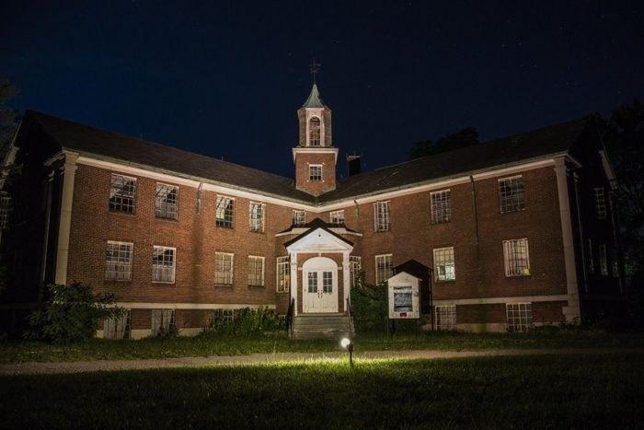 Considering that there were a few asylums throughout the state of New York, one of them seems to outmuscle the other when it comes to the stories of paranormal activity. During its time of operation, more than 17,000 people were buried with a majority of them in unmarked graves. The farmhouse was a place where vagrants would work in the fields and live since they had no home. Afterward, the house took the shape of a hospital (both for medical purposes and as a sanitorium for tuberculosis patients among other uses. It was then used as a psych ward where an inmate named Roy would meet his demise. It is said that he has taken the form of a spirit that could long be described as a 7-foot shadow man that haunts visitors. 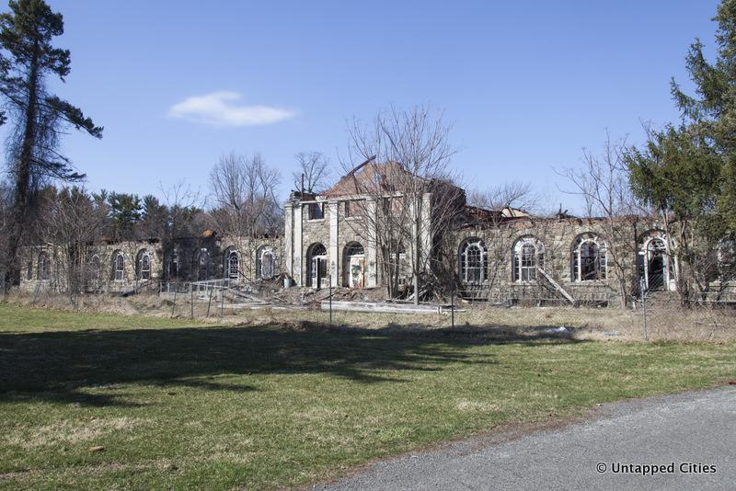 Resting on more than 2,000 acres of land is a building with the design that was inspired by Thomas Jefferson’s Monticello. Despite the beautiful landscape and building architecture, the confines were anything but friendly. Letchworth Village served as a facility that was designed to care for physically and mentally disabled children and adults. Like most of the institutions in New York State, Letchworth Village was one of a handful of places that had been under suspicion for patient mismanagement. Complaints of malnutrition, patients living in filthy conditions and not wearing any clothing were among the many things that were rumored to have happened. It was also the place where test vaccinations for polio were done. While the abandoned facility is considered off-limits to the public, those daring to trespass would hear moving objects or objects being thrown around. Of course, there also had been weird, uncomfortable sounds that could be heard in the halls and rooms. 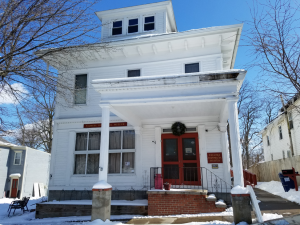 Located east of Rochester, the village of Palmyra was the site of a tragic house fire that killed six children and their mother in 1964. Since then, the house was converted into a museum. But visitors have been visibly spooked by various paranormal activities they had experienced. These included feelings of being pulled or tugged, being “pawed” gently by a phantom cat, the smell of ash coming from the basement, and toys sliding off the shelves. 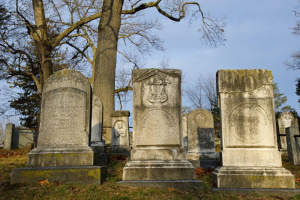 Ah yes. Sleepy Hollow. You may have heard that world-famous Washington Irving story of Ichabod Crane and the Headless Horseman. And you probably have seen the various film or television adaptations of that very story. Believe it or not, Irving himself is one of the many who are calling this cemetery their final resting place. But the stories of those buried here are often more horrific than the legendary Headless Horseman story. Tales of murders, suicides, and a handful of scandals that will be guaranteed to leave you spooked by the time you are finished with the local tours they host. 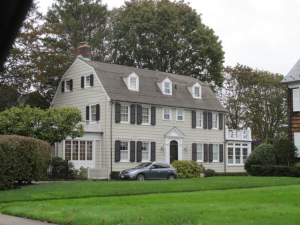 If there was a haunted house that you’ve probably heard of, the Amityville Horror House might be the first that comes to mind. Situated in the town of Amityville on Long Island’s south shore, the house was the site of a gruesome murder. In 1974, Ronald DeFeo, Jr. murdered six members of his family. He was later convicted and is currently serving life in prison. A year after the murders, a new family had moved into the home only to vacate it in less than a month after seeing what could be copious amounts of paranormal activity including visions, bad smells, and very strange, creepy feelings. Though it is a private residence, the current owners probably would appreciate it if you respect their privacy rather than take pictures or just waltz up to the front door.