The Madness of Roosevelt Island 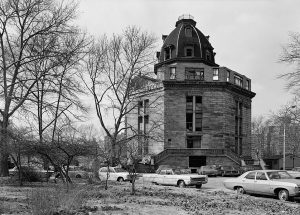 There are certain hotspots in Americana that make your mind go wonky… just by looking at them. You simply know, at a core level that there is something wrong. That human greed, impatience, apathy, malice, or blind stupidity went and screwed the pooch at a fundamental level. Spots in the great tapestry that is the world – for its not just limited to America – where our better angels were given the bum’s rush and our lesser demons went for a bender. Chernobyl, Auschwitz, Ten Mile Island, the city of Hue, My Lai… and, to put it mildly, Haunted Roosevelt Island.

Sure, you’re probably thinking: “That place? I take my kids there. Nice parks. Full of Diplomats. What the hell are you talking about?”

Bear with me, there’s a reason why we’re including this joint in a Haunted Tour Blog. First of all, what is Roosevelt Island?

Roosevelt Island is a slender isle in New York City’s East River, inside the district of Manhattan. It lies amidst Manhattan Island to its west and the precinct of Queens, on Long Island, to its east.

The island was once called Minnehanonck by the Lenape. Later it was called Varkens Eylandt – Hog Island – by New Netherlanders. And, once the colonial era started it changed to Blackwell’s Island. It was also identified as Welfare Island when it was used largely for different hospitals, from 1838 to 1973. It was finally renamed, in 1973, Roosevelt Island – in honor of Franklin D. Roosevelt.

Here’s the thing about Islands – Alcatraz, Ten Mile, Tortuga Keys, etc – they have a reputation. A reputation that steems from their geographical characteristics. They are secluded, easy to guard, and, more importantly, on the outskirts of polite society. If you want to hide something from prying eyes, you go and stick it on an island.

New York has always been a bustling town, one that has a fair share of knaves, cutthroats, and folks that simply don’t integrate with the brand the Chamber Of Commerce wants to sell. What do you do with these castoffs? Some you send to prison… the rest, the deviants – as they were called back then – the hysterics, the rabble-rousers, the rebels, the anomalies, the odd bunch… well, those you simply swept under the rug; the “rug” being code for you tossed them in an island and quarantined them like lepers. “He likes boys… Off to the looney bin… She’s unhappy in her marriage… One more broad off her rocker… He looks odd… Might be a virus we don’t know… She’s inflamed with some nonsense about women and their right to vote… Up the creek with that toots.”

Up until the middle of the 19th century, the only manmade object on the island was the Blackwell House. A now historic landmark that was built in 1796 by Jacob Blackwell, the original proprietor of the island. Up until that period the island had seen a couple of boating disasters and maritime collisions but nothing that could end up giving the region a sinister glow. Then Andrew Jackson looked at the spot and all-hell broke loose.

The Octagon was the second building – and one of the most famous still standing on the island – that was cleaved into the land. It was erected in 1834 and served as the main entrance to the New York City Mental Health Hospital aka the City’s Lunatic Asylum.

You know Arkham Asylum from the Batman comics? Where they house the Joker, Two-Face, Scarecrow, and all those nutty characters? Well, meet the inspiration for the place.

You can make a list of horror movie troupes devoted to mental hospitals and be certain that this place has checked off every one of them. Mistreatment of patients? Check! Mad scientist experiments? Check! Serial killers running loose? Check! Guards stepping out-of-bounds? Check! Shrinks summoning Lovecraft like beings in the basement? Check! If you can imagine it, then the hospital did it. Period.

The place came under scrutiny in 1887 when it became the center of an exposé by journalist Nellie Bly in her 1887 book Ten Days in a Mad-House. And what an expose it was. The journalist from American Horror Story: Asylum… The one that cracks the case and reveals all the mental hospital’s woes… She’s based partly on the experiences of Bly.

That’s right, on the same island with the nuthouse, the authorities decided to build an experimental disease research and treatment facility.

Nowadays, COVID gets all the limelight, but, back before a vaccine was discovered, smallpox was the thing most nations feared. Bubonic plague might be more bombastic, malaria more predatory, but smallpox was the OG of diseases. It was fast, it was ruthless and it has been around for more than 3,000 years in all parts of the world.

According to the World Health Organization, smallpox killed one in ten children in Sweden and France and one in seven in Russia. It was responsible for the biggest genocides in history; the native American genocide and the extermination of indigenous people in Central America.

The epidemic exterminated Louis XV of France and other European rulers. Queen Elizabeth I had the condition as a girl and used heavy make-up to cover her pockmarks. The thing was used as biological warfare not only in the US – to eradicate natives – but around the world. Smallpox moved nations and was instrumental in the way history ultimately panned out.

Due to widespread worldwide vaccination efforts, the disease was finally annihilated in 1979; it is the only disease to be effectively eradicated through human interference. Until that year finally dawned, the world was basically in smallpox’s grip and many cities built hospitals specifically for treating smallpox victims.

One of them was in New York… and I’ll give my readers one guess as to where they placed the hospital.

The southern tip of Roosevelt Island gave ferry access to infected people; the authorities doing everything possible to keep them away from the population.

From 1856 until 1875, the hospital attended about 7,000 patients a year. In 1875, the construction was transformed into a nurses’ dormitory, and the city’s smallpox hospital was transferred to North Brothers Island.

Only some of the exterior walls and the foundations survive today.

But it wasn’t just for smallpox patients… NOPE. The hospital has a rather strange past, one clouded in mysteries. The place became a mad scientist’s dream; ready and willing subjects, and government backing to boot. The epicenter of it all? The Strecker Memorial Laboratory. The site of the first pathological and bacteriological research center in the United States was quite literally a leisurely stroll from a huge – sometimes off the book smallpox hospital – and an Insane Asylum brimming with miscreants society wouldn’t miss. The labcoat wearing madmen were given the keys to the asylum and as a bonus, they got an all-access pass to a smallpox hospital.

The small Romanesque stone building quickly became the home to groundbreaking work in disease management and treatment. It revolutionized humanity’s understanding of diseases in the early 20th century.

Financed by the Strecker family, the modest structure was erected in 1892 as a supporting lab to the larger City Hospital nearby on the island. In its halls, all manner of experimentations were conducted, most barely remembered the Hippocratic oath.

Dozens of people went missing and dozens more simply died of “unknown causes” after visiting the Strecker Lab’. There was little to no oversight and, given the enormous leaps in discovery coming from its kitchens and workrooms, they were given a lot and I mean A LOT of breathing room. To say what happened in Roosevelt Island stayed Roosevelt Island was underscoring the bat guano levels of insanity taking place there.

You can visit Roosevelt Island and get a gander of what’s left of these buildings… now, most of them falling apart and going to decay. In the present, they form a sort of cat sanctuary for the thousands of displaced felines that somehow have found their way onto the island and have claimed the region as their home.

For more macabre tales check out our blog.