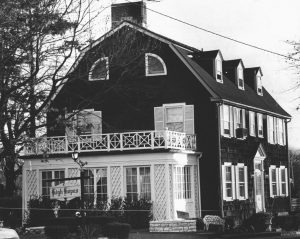 The Amityville Horror: Haunting or Hollywood?

A tale of murderous thoughts gone absolutely haywire, a family betrayed in the most inhuman way possible… it makes you wonder what resides in the gorgeous, Dutch Colonial style home in Long Island that so easily warped a brother’s mind into committing murder. In this article, we’ll separate Haunting from Hollywood, giving you an accurate picture of what happened in the home and what paranormal activity occurs to this day in the Amityville Horror House.

112 Ocean Avenue. Amityville, New York. Situated on the south shore of the island, the grand home sits on a pasture-like lawn. Curved eaves lead your eyes across the façade, and its beauty is as grand as the horrors that occurred here. Mid-November, 1974, Ronald DeFeo Jr. shot and killed six members of his family in the home. He was later convicted of six counts of second-degree murder in 1975. Around 6:30 in the evening, a 23-year-old Robert DeFeo ran into Henry’s Bar, screaming for help, stating, “you’ve got to help me, I think my mother and father are shot!” After a short pilgrimage to the DeFeo home, it was realized that his mother and father were in fact shot and killed, as well as four of his siblings. Later, during his trial, he and his lawyer mounted an affirmative defense of insanity due to DeFeo Jr.’s claims of hearing voices of his family plotting against him. Found competent to stand trial and aware of his actions, a 23-year-old Ronald was convicted of all counts and was sentenced to six 25-year charges. As of November 2020, Ronald remains at the Sullivan Correctional Facility in Fallsburg, New York. There have been controversies and changing stories throughout the years, all of which can be read about here. For this article, we want to cover what Ronald left behind… a home with a dark past.

The Horrors Continue On

On December 18th, 1975, the Lutz family purchased the home on 112 Ocean Avenue… and as they moved boxes from their moving trucks, a Catholic priest stopped by to bless the home, supposedly at the request of Kathy Lutz, the family matriarch. The priest, later revealed to be Father Ralph Pecoraro, said this about the Amityville home, “I was blessing the sewing room,” says the priest. “It was cold. It was really cold in there. I’m like, ‘Well, gee, this is peculiar,’ because it was a lovely day out, and it was winter, yes, but it didn’t account for that kind of coldness. I was also sprinkling holy water, and I heard a rather deep voice behind me saying, ‘Get out!’ It seemed so directed toward me that I was really quite startled. I felt a slap at one point on the face. I felt somebody slap me, and there was nobody there.”

George and Kathy Lutz were newlyweds, coming together into a beautiful blended family when they purchased the Amityville home for $80,000. Kathy had three children from her previous marriage, Missy, Daniel, and Christopher. They later went on to have two children together, Noel and Gabrielle. With the money they received from selling George’s mother’s home, they put down a healthy down payment on what they thought would be their dream home… the sanctuary that they could raise their family in. Their stay would only last 28 days, however, as the dark entities that reside inside made quick work of the Lutz family.

The home entities were not shy to show themselves, making themselves known through sound, touch, and appearing to the family and investigators. Even in 2005, when Inside Edition was conducting an interview, a swarm of flies appeared in the home, tormenting the camera operators and interviewer. Any seasoned paranormal investigator will attest that swarms of flies have historically been linked to demonic entities and possessions. Are there demons living in this Ocean Avenue home? Could they have been the voices inside of DeFeo’s head?

Despite the home having been blessed by a priest before their move-in, the Lutz family was on the receiving end of some pretty horrific paranormal occurrences. George, the family patriarch, claimed to wake up daily at 3:15 each morning, the precise time when the DeFeo murders occurred in the home. Missy, the Lutz daughter, began to communicate with an imaginary, or perhaps demonic entity is known only as ‘Jodie.’ Kathy even claimed to have levitated above her bed, waking from the disturbance with painful welts all over her chest. The children also reported levitations during their slumber. George and son Daniel reported an apparition of a pig-like creature staring at them from a window, its red eyes piercing through the dark.

On January 14th, 1976, the Lutz family had enough and had reached their breaking point. They left the house and every single one of their possessions behind, following a night of terror that they refused to describe in detail. They fled the home, leaving the evil entities behind, watching from the windows as they drove their family to safety.

Explorations from Ed and Lorraine Warren would corroborate the Lutz’s stories. They stayed at the house for a night, investigating the claims and seeing if they would be able to make contact with any entities. Ed Warren even stated in the 2000 documentary ‘Amityville: Horror or Hoax’ that it was “This was no ordinary haunted house. On a scale of 1-10, this was a 10.”

Today, people remain skeptical about the home. Some say it was a publicity stunt on the Lutz family’s part, to rake in money from book deals and interviews. But George Lutz says otherwise. In a snippet from the documentary ‘Amityville: Horror or Hoax, George states that “I believe this has stayed alive for 25 years because it’s a true story. It doesn’t mean that everything that has ever been said about it is true. It’s certainly not a hoax. It’s real easy to call something a hoax. I wish it was. It’s not,” Lutz said. Even in 2013, a documentary called ‘My Amityville Horror’ interviews Daniel Lutz, Kathy’s child who survived the horrifying paranormal attacks. He appears obviously disturbed by the past he lived in the home. “This is not something I asked for,” Daniel says in the film. “I’ve been running away from it, and it finally caught up with me.” He tells of abuse suffered at the hands of his stepfather and even of satanic dabbling occurring within the walls of the home. Daniel now lives in Queens and remains steadfast in saying that the house ruined his life, and he continues to have nightmares regarding the home to this day.

Still Skeptical? Both Kathy and George took a polygraph test to prove they were truthful about the happenings in the home. They passed.

The Amityville home officially sold in February of 2017 to an undisclosed buyer for just over $600,000… $200,000 below the asking price. The address has since been changed for privacy reasons, and we do advise online research only as this is a private residence. Current owners report no paranormal happenings, it seems as if the house lies dormant, for now.

So what do you think? Was the entire story a scam? Or are there demonic entities residing deep within the walls waiting to strike again when the time is right? Regardless, six horrific murders occurred here not long ago, leaving behind a deep, dark stain that permeates the walls of the Amityville House.