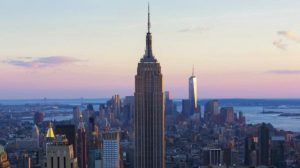 New York City is home to some of the most notable views in the United States. There are many sites and buildings that do not need any introduction because they are instantly recognizable. If you are lucky enough to visit the Big Apple, you most likely have a list of places to see and things to do. The Empire State Building is a very easily recognized landmark in New York City. It earns its name from the nickname of the state; the Empire State. This incredible piece of architecture draws thousands of visitors every year. Most tourists will have this building on their itinerary. The Empire State building is featured in movies, written about in novels and widely photographed. But what is the history behind this iconic landmark in the Big Apple?

The History of the Empire State Building

The Location of the Building

The land that the Empire State Building is built on, was originally part of Mary and John Murray’s farm located on Murray Hill. This location was the site of George Washington’s troops after retreating from the British during the Revolutionary War. John Thompson purchased a tract of land in 1799 that included land surrounded by what is known today as Madison Avenue, 36th Street, 6th Avenue and 33rd Street. By 1862, the Astor family would purchase this same piece of land. They would eventually build open the Waldorf Hotel in this location. By 1897, the Astoria hotel would be opened next door. These two hotels had a combined 1300 bedrooms, which made it the biggest hotel in the world. Together, the combined hotels had a total of 1,300 bedrooms making it the largest hotel in the world at the time. The Waldorf-Astoria served as the social center for high society New Yorkers until the 1920s. Once society moved further uptown, the Astor family sold the hotel to the Bethlehem Engineering Corporation for $14 million dollars. The original hotel that was so influential in New York society and history was shuttered on May 3, 1929.

The Early Stages of Building Development

Bethlehem Engineering originally planned a 25 story office building for the space. Unfortunately, the company defaulted on the bank loan for the construction. The land was then resold to the investment group, Empire State Inc. The architecture group was able to come up with a design in 2 weeks. Thanks to a 1916 Zoning law, the bottom floors had to be bigger than the upper ones. In this way, the Empire State Building was designed from the top on down which also gives it a pencil-like shape.

The original building design was for 50 stories, but that number gradually became 80 stories. In order to guarantee unobstructed views, other building going up around it had height restrictions placed on them. Construction was difficult due to traffic patterns and space.

May 1, 1931 was the official opening of the Empire State Building. Sadly, the opening occurred at the beginning of the Great Depression and most of the office space remained vacant.

Facts about the Empire State Building

This Art Deco building has more than 100 floors and 73 elevators. There are observation decks on both the 86th floor and the 102nd floor. The lights on the Empire State Building can be changed to match seasons, sports teams and special events.

The Empire State Building certainly seems to be impressive and benign. Can it really be haunted? It is worth taking a closer look into some of the darker parts of its history.

Due to its impressive height, many poor souls have attempted to commit suicide by leaping from the Empire State Building over the years. Sadly, there is one death that the building is most noted for. Many visitors report seeing a woman on the observation deck. She wears clothes and makeup from the 1940s and her lips are quite red. Observers say that she laments the death of her fiancé in Germany. She then proceeds to hurl herself over the barrier. It is thought that this woman is   Evelyn McHale. She was a 23 year-old woman who did leap to her death in May of 1947. Unfortunately, she landed on top of a limousine. The picture of her corpse on top of the damaged limo is called “the most beautiful suicide.” This unfortunate incident happened on the 16th anniversary of the opening of the Empire State Building.

During the construction of the Empire State Building there were unfortunately many accidents. Official records say the five workers perished during construction. The New York Daily News puts that number at 14, actually. And some reports say it is as high as 42. It is quite possible that some of these poor souls still walk the grounds and hallways of the Empire State Building.

The Empire State Building is open for businesses and tourists alike. In fact, you will find this building to be a vibrant and lively spot in the Big Apple and there is usually a long line waiting to enter the building. Once inside, you will be able to ride the elevator to the observation deck and enjoy the view. Today there are suicide guards in place to help prevent future tragedies.

New York City is a great place to visit. There are countless museums, shops and restaurants. People come from all over the world to see the countless marvels the city offers. It is well worth a visit too.

Any time of year is a great time to visit the Big Apple. And Autumn in the city is perfect. You can spend your days exploring the various neighborhoods that fill the five boroughs. Visitors to New York City should definitely pick up a map. The city is easy to walk and using public transportation is easy and inexpensive.

If you come to visit in the Fall, definitely stop in to the Empire State Building. But do not stop at just this one site. New York City has a long and colorful history. There are plenty of haunted spaces around town with apparitions and souls aplenty. It is a good idea to find some walking tour groups and get the inside scoop. This way you will not miss a haunted moment of the Big Apple.

New York City is the city that never sleeps. This also applies to their ghostly residents as well. Not sure where to start? Ask a local. New Yorkers are proud of their city and happy to give you insider tips, personal experiences and directions.

With all of the famous architecture in New York City, the Empire State Building is one of the most recognized around the globe. This iconic building has a rich history. Today this building is home to many offices and countless people work there every single day. It is also home to those who lost their lives during construction. And it is home to one sad woman from the 1940s who continually pines for her fiancé.

Check out some of our New York City Ghosts tours and hair raising websites, like Civil War Ghosts, not to mention our interactive fully immersive tour app.