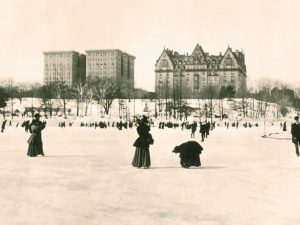 The Dakota building, set the standard for Upper Westside apartment living, built at a time when the upper classes were only just becoming familiar with the concept of living in an apartment.

Edward Cabot Clark, the founder, and CEO of the Singer Manufacturing Company, of sewing machine fame and wealth was a New York Real estate speculator who had a vision for the barren wastelands of the upper west side.  As well as sparing no expense on the Dakota building, he also corralled other developers to commit to maintaining the luxury feel of the new neighborhood.

Located on the northwest corner of Central Park West and 72nd Street across the road from Strawberry fields. The building was designed by Henry Janeway Hardenburgh who would go on to design the Plaza Hotel and the Waldorf Astoria. No detail was overlooked in the design and floorplan, up to 16 rooms in some apartments, a highly embellished exterior and an overall style that defies easy classification. Some called it ‘Chateauesque’ some ‘German Renaissance’

The address has been upscale and exclusive from the start. Construction started on October 25 of 1880 but did not finish until October 27th of 1884. The surroundings were a long way form the action at the time, downtown was a lot further south than it is today. Some joke that the name refers to the remoteness of the building.

Although every style of building is seen in New York City, the Dakota is a unique blend, with steep roofs with high gabled sides. Balconies jut out from all sides, decoration is plentiful, and again of no real style, except that all of its own. The Dakota apartment building is square in plan. Built around an airy and atmospheric central courtyard. The main entrance is arched, and large enough for a big horse-drawn carriage. The entrance is in the archway, to permit passengers to disembark while avoiding any inclement weather.

With Carriages there are horse, these were accommodated in a large, two section stable with multiple stories. Once horses were superseded by the horseless carriage, the stables were converted into a garage, and used as such until 2007. Later the impressive building was transformed a condominium.

Inside, the floor plans of the apartments were influenced strongly by the architectural trends going on in France. Across every apartment, all major rooms were connected to the others. All these rooms are also accessible from a nearby corridor or hall. This novel arrangement allows guest to flow from one room to another naturally. Especially important for entertaining and at holiday periods. Also, the principal entertaining rooms in all apartments faced an external street. Oddly, this includes most master bedroom suites, noisy! The apartments could be aired from two different sides, allowing for easy flow through of breezes and air. At this time this kind of layout was a novelty. Interior fittings were luxurious as well, floors of cheery, oak, or mahogany laid lovingly by master craftsmen, while the ceilings reach up to fourteen feet high!

Every apartment was laid out differently. Built with sixty-five apartments of four to twenty rooms each, several have been subdivided since. The apartments could also be accessed both via a staircase or elevator. The service staff had a separate set of stairs for the many kitchens and some elevators. With occupants coming from the large individual family homes around the city there needed to be many amenities that had been attractive and exceptional for the time. There was a large central dining room, from which meals could be sent to the individual apartments via dumbwaiters. Rare at the time, there was also a central heating, not to mention, a gymnasium and playroom in the building. These communal spaces were on the 10th floor; but were later converted to even more apartments. Naturally there was a private lawn for the tenants. With a garden, several tennis courts, and of course a private croquet lawn.

The apartments appeared advertised in the New York press in 1933, featuring an interview with the full time manager of the building. Considered a landmark of New York City even when it was launched. The building has long been an exclusive residence. In 1972, the building was added to the register of historic places. However, it wasn’t until 1976 that the building was considered a historic landmark. 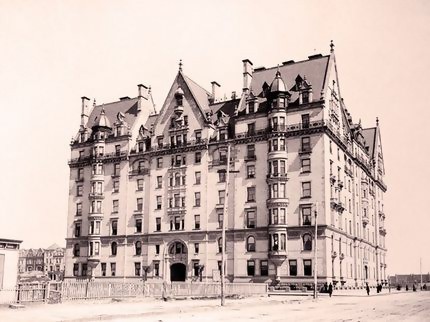 The Dakota has been home to artists and performers throughout it’s history. The notoriously choosy Condo Board has refused several well-known residents applying for the right to purchase an apartment in the building.

In 2005 Albert Maysles had proposed selling an apartment to actors Antonio Banderas and Melanie Griffith. The board rejected the actor couple. Albert had told the New York Times that he was disappointed with the way the building had seemed to be changing. He felt the board was losing touch with its artistic roots, which encouraged interesting people to live there. He accused them of only being concerned with those who had the money.

Other notable rejected applicants include; Billy Joel, Carly Simon, and Gene Simmons even Dennis Mehiel, the paper cup barron of America in 2002.

The most famous resident was John Lennon and Yoko Ono. A member of the Beatles, and solo artists with his visual artist wife Yoko. Lennon was murdered on the steps of the Dakota in 1980. It was a cold December night when he was killed in cold blood by Mark David Chapman. Mark was a music fan with mental health issues, he shot John Lennon four times in the shoulder and back. Lennon died almost instantly. He only took a few steps before he collapsed on the ground. The loss was world wide news, and marked another handy marker for a turning point in world history. 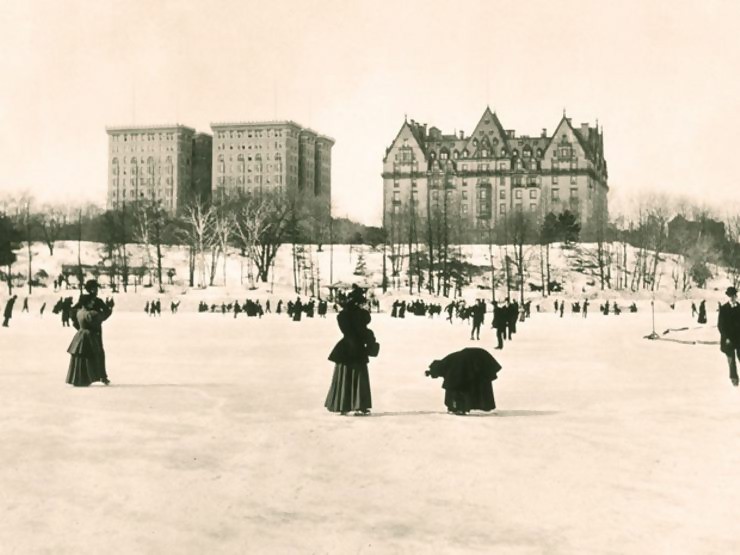 New York is a psychically active place, the site of many hauntings, and so much human passion and energy that ghosts are perhaps inevitable.

We pick up the reports of ghostly activity at the Dakota Apartments in the 1960s, a construction worker who was working near the apartments stated he saw a figure with the body of a man but the face of a young boy. Coinciding with the death of another famous resident, Judy Holliday. The construction workers also felt like they were being closely watched while they worked, or perhaps just they were being too loud!  Today residents claim to have seen a little girl, dressed in period clothing waving and smiling from several lower windows.

It is said that the spirit of John Lennon lives on in Dakota apartments to this day. One resident witnessed John Lennon playing piano, right in their apartment. He was murdered in the archway of the southern entrance.  Sometime after the murder, many people claimed to see Lennon leaning against the wall, in his characteristic white flared suit in the stone archway where he died. he was seen by several people with an eerie light surrounding him. One woman said Lennon spoke with her, she claimed he said “Do not be afraid. I am still here with you”.

John Lennon himself had reported seeing supernatural happenings. He claims he saw a UFO from one of the windows of the apartment in the Dakota building. He also repeatedly met a ghost he called the crying lady ghost. She was said to be lurking benevolently in the hallways of the older parts of the by now extended and modified building.

One reoccurring happening has been that objects have been seen in their apartments to move of their own accord. Even large objects like furniture or rugs. Residents also often report hearing tiny footsteps and odd noises at strange times in their apartments. Frederick Weinstein, a resident, with his wife Suzanna went on record reporting seeing the lights of a chandelier in his living room form below on the street. He saw this through the 72nd street window; however, he does not have any chandeliers. However, when he ran into his apartment, the lights were gone. But upon further inspection, he did notice a patched up set of bolts in the ceiling where a chandelier had once hung.

The most sinister stories in the Dakota Building or New York come from the basement. Once, a porter had taken a tenant to the basement area with the intent to show them that to show them objects moving mysteriously on their own. The porter had been in the room earlier when a heavy metal bar went flying across the room, nearly hitting the porter. The two men were down in the basement investigating these claims. The porter claimed the bar landed at the porter’s feet, he had gone to pick it up only to find it was way far too heavy for him to lift. Other people have seen a man who looks like Edward Cabot Clark, the developer of the building, once again in the basement. However, Clark never lived in the building.