The Bio Terror of Plum Island 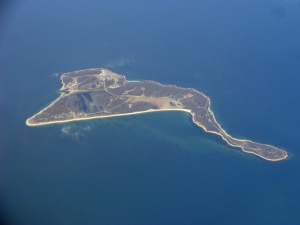 Off the coast of New York, lays a conspiracy theorist wet dream… PLUM ISLAND. A place shrouded with mystery, full weird tales, and seeped in deep foreboding lore. The place every so often pops up in the news and Long Island natives always have an eye on it; aware that it has a habit of generating unwanted havoc. Why? Because there’s a secret US-based there.

PIADCNY or Plum Island Animal Disease Center of New York is a United States federal research facility, that as the name says, is dedicated to the study of animal diseases. It is a branch of the DHS Directorate for Science and Technology. The joint’s main goal, since its inception in 1954, was to protect America’s livestock from animal diseases… and every now and then, like during the Cold War, develop secret biological weapons targeting the livestock of Mother Russia.

It is also a place, that if rumors can be believed, that spawns nightmares… creatures like the Montauk Monster.

The History Of Plum Island.

Plum Island is located near the northeast coast of Long Island in the state of New York. It has a rather vibrant, often controversial, history.

During the Spanish–American War, the spot was purchased by the government for the construction of Fort Terry. The Fort became the stomping ground of some rather sketchy- mad scientists – types. For years it was shrouded in mystery and people over the water, looking at its shores, began speculating on the things taking place there.

Then, Hitler decided to invade Poland and the Japs thought it was a swell time to go to Hawaii. In World War II the place served as a campground for eggheads. Everyone Uncle Sam thought could streamline the war process and help the US come up with the next superweapon to stop teh bloodshed over in the Pacific and Europe was roped into service; a great deal of them dragged into the corridors of Plum Island. Here they would play around with physics, chemistry and devise doomsday contraptions to drop on the Krauts’ head. After the peace treaty, that ended that bloody raucous, the Fort became a way-station for Nazi scientists hungering for a chance at the American dream. A meeting place between officials and Hitler’s cronies; pardons a plenty. In a way, this was one of the staging grounds for Operation Paperclip – a secret program of the Joint Intelligence Objectives Agency (JIOA) in which about 1,600 German scientists, engineers, and technicians, were given asylum in the United States, between 1945 and 1959. In Plum Island and well as NASA, you could go into a conference room and scream “Hail Hitler!” and marvel at how many hands instinctually went up.

So, yeah, Plum Island after the war was full – brimming – with the type of folks how played with nerve gas and created the V-2 rocket.

After World War II, the Fort was deactivated and scrubbed clean. It stayed close for over 7 years until it was reactivated in 1952 as a center fo the Army Chemical Corps. The island became one of the main animal disease investigation labs in the world after it was given a blank slate in 1954; the US was getting hammered – economically – by an outbreak of the foot-and-mouth disease in cattle along the borders of Canada and Mexico. That year, the US Army gave the island to the Agriculture Department.

Plum Island is self-sufficient. It has its own fire department, power plant, water treatment plant, and security forces.

Animals seen on the island are instantly killed by the military and trained sharpshooters; snipers on alert and ready to prevent the possible transmission of diseases into the island’s carefully maintained livestock… and vice-versa.

Plum Island has experienced a couple of accidental outbreaks and pathogen faux-pass of its own.

1978, an unknown disease was released into animals outside the center. The creatures were quickly eradicated, but to this day, no one is entirely certain if any actually made it past the island’s borders. Reports of what actually happened have been classified by the Intelligence Department.

Two incidents in 2004 of foot and mouth disease being released in the center became national news. Foot and mouth disease, was eradicated in the US as of 1929… the only known cases of the disease can be found in the stocks of Plum Island. In response to this incident, New York Senator Hillary Clinton and Congressman Tim Bishop wrote a letter to the Department of Homeland Security:

“We urge you to immediately investigate these alarming breaches at the highest levels, and to keep us apprised of all developments.”

The Montauk Monster is said to be an escape from the Plum Island facility. Some even link the creature to the Chupacabra and a widespread theory proposes that those creatures are in fact genetic monstrosities created in a lab. The Island has a reputation for generating mutants and monsters and just about every creepy crawler out there.

The first time the island allowed news media to step into their buildings was in 1992. It was a by the book, “don’t stray off the path,” sponsored by the Men In Black in order to calm the frazzled nerves of the Long Island native across the bay.

Speculation of what actually occurs there is widespread. No one really knows and each time a document hits the press it’s so redacted that it might as well be a black page with non-sequitur phrases. Classified reports, now made public by the Freedom Of Information Act, detail some – not all – of the ultra-secret weapons projects conducted in the labs during the Cold War… and even those make little to no sense.

In 2000, activists prevented the center from expanding its providence to include diseases that affect humans. Since then, particularly in 2002, Congress has tried to slip that caveat into law past weary activists. Every-so-often tagging it to a bill no one really gives much notice to.

Building 257, found at Fort Terry, was built around 1911. The main and original goal of the building was to store weapons. To stockpile mines, explosives, and the materials needed for cable tanks and torpedos.

When the Army Chemical Corps, in 1952, acquired the place, it became the go-to facility for anti-animal biological warfare research. A secret lab devoted to animal testing and studies. The goal was to create diseases that would attack an enemy’s livestock, hence weaken its supply and food chain.

In 1954 the facility was passed over to the Agriculture Department, but with the red menace growing in strength, the experiments didn’t cease. Nope… they just intensified.

The building is a 164,000-square-foot (15,200 m2) T-shaped white structure. It is found on Plum Island’s northwest plateau on a 10-acre spot where it clings by a sharp cliff. To one side of it is the site of the old Plum Island Lighthouse.

A more modern bio-warfare facility that was built in 1954, right around the time of the Army to the Department of Agriculture transfer.

Building 101 became the site for much of the research and testing of bio-weapons. In it, scientists played with dozens of pathogens and vectors.

The program was finally canceled in 1969 by President Richard Nixon.

101 and 257 -‘are constantly sprayed with chemicals due to materials once employed in them.

According to the Department of Homeland Security (DHS), Building 257 currently poses no health hazard.