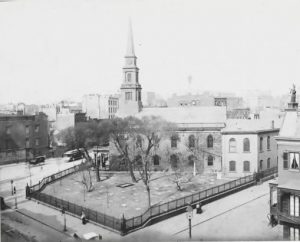 New York City is well known for having a vibrant and colorful history. The city is full of unique sections that are made up of communities that have sprung up around buildings, each with their own beauty. These buildings however, often come with a dark history.

In a city as big and as old as New York, there is no shortage of haunted buildings and tales of ghostly spirits. One of these buildings is St. Mark’s Church In-The-Bowery. It is located in the East Village and it has a very long history. Let’s take a closer look at New York City’s oldest continuous religious site.

History Of The Church

In 1651, Petrus Stuyvesant, who was at the time the Director General of New Netherland, purchased land for a bowery, or farm, from the Dutch West India Company. He began to build on the property and by 1660 he had built a family chapel located at the present day site of St. Mark’s Church. Stuyvesant died in 1672 and was buried in a vault under the chapel.

Many years later, Stuyvesant’s great-grandson, Petrus, sold the chapel property to the Episcopal Church for $1. The sale stipulated that a new chapel had to be erected to serve Bowery Village. This was the community which had grown around the Stuyvesant family chapel. In 1795 the cornerstone of the present day St. Mark’s Church was laid. The church was built using the fieldstone Georgian style by the architect and mason John McComb Jr. The church was finished and consecrated on May 9, 1799. Alexander Hamilton gave legal aid when incorporating St. Mark’s Church as the first Episcopal parish independent of Trinity Church in the United States. By 1807 the church had as many as two hundred worshipers that attended the summer services, and 70 that attended during the winter.

The church steeple was designed in 1828.  The design of it is attributed to Martin Euclid Thompson and Ithiel Town. It is constructed in the Greek Revival style. More changes to the church happened at the beginning of 1835, when John C. Tucker’s stone Parish Hall was constructed. In the following year the church was renovated when the original square pillars were replaced with thinner ones following in the Egyptian Revival style. In addition, the current cast- and wrought iron fence was added to the property in 1838. All of these renovations are directly credited to Thompson. During the same time period, the two-story fieldstone Sunday School was completed.  The church was then able to establish the Parish Infant School for poor children.

Later, in 1861, the church commissioned a brick addition to the Parish Hall. This addition was designed and supervised by architect James Renwick Jr., and the St. Mark’s Hospital Association, which was made up of some of the members of the congregation. Outside the church, the cast iron portico was added around 1858. The design of the portico is attributed to James Bogardus, who was an early innovator in cast iron construction.

Architect Ernest Flagg designed the rectory at the turn of the 20th century.  Overall, while the 19th century saw St. Mark’s Church grow through its many construction projects, the 20th century was rooted in community service and cultural expansion. 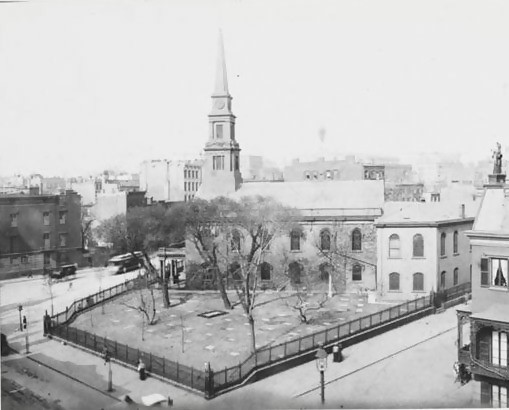 The Poetry Project and The Film Project, which later became the Millennium Film Workshop, were founded in 1966.  In 1975, the Danspace Project was begun by Larry Fagin; the Community Documentation Workshop by Arthur Tobier was begun; and the Preservation Youth Project, a full-time work training program was started. This program was responsible for preserving St Mark’s famous exterior under the supervision of artisan teachers. Sadly, on July 27, 1978, a fire almost destroyed the church. The Citizens to Save St. Mark’s was quickly founded in an effort to raise funds for its reconstruction and the Preservation Youth Project undertook the reconstruction. The group was supervised by architect Harold Edelman and craftspeople, who were recommended by preservation contractor I. Maas & Sons. The Landmark Fund evolved out from the Citizens to Save St Mark’s and it continues to exist. Its sole purpose is to help maintain and preserve St. Mark’s Church for future generations. The restoration on the church was completed in 1986, with the addition of new stained-glass windows designed by Edelman.

How Is St. Mark’s Haunted?

Since St. Mark’s Church is the oldest continuous religious site in New York City, there is a lot of potential for ghostly inhabitants. There is also a long list of historical figures and politicians who are interred there as well.

Peter Stuyvesant was known to be a stern leader. He was well known for a career that had taken him around the world. Unfortunately, he lost his leg when he was in Curacao on military business. When he finally came to rule New Amsterdam, he was famous for both his no-nonsense demeanor and his wooden leg, which he kept wrapped in silver studs.

Over the years, any church attendees, visitors, and staff have reported seeing a strange presence. Most often, distinctive footsteps can be heard, which include the unmistakable sound of a peg-leg echoing throughout the halls and pews of the church.  People have reported seeing strange movements and shadows within the church’s windows while walking by on the street. In addition, the bells at St. Marks have been known to ring at odd times, often accompanying a sighting of the ghost.

Many people have also reported seeing a woman in the pews of St. Mark’s Church. She is known to be wearing period style clothing and sitting at the end of the pews. She has also been spotted in the balcony. When the watchman tries to approach her, she seemingly vanishes into thin air.

Mr. Stewart was an Irish businessman who made his fortune in the department store business. He owned a “Marble Paradise”, which was considered to be the city’s first department store. The store took over a whole block and was four stories high. Sadly, after A.T. Stewart died, so did his business.

Stewart was buried at St. Mark’s Church. However, people still believed he was wealthy. In 1878 his body was stolen and held for ransom. Mrs. Stewart was so upset that she paid the thieves the ransom. She then had his body placed in a crypt in another cathedral.

People continue to claim to see the ghost of A.T. Stewart. It is thought that he likes to come back to his original resting place.

The Cemetery At St. Mark’s Church

The cemetery at St. Mark’s Church is known for being as beautiful as the church. In fact, it is a New York City landmark and it is listed on both the State and National Registers. You will find that it features a tranquil garden, a playground, and several marble underground vaults. Most of the interments that happened at the cemetery took place between 1830 and 1875. One of the burial sites is referred to as the East and West Yards and it is attached to the church, while the other site lies further east, along 11th avenue.

New York City has much to offer visitors to the Big Apple. While in the city, there is obviously much to see and do; you can catch a Broadway show, tour a museum and do some great shopping. But visitors to New York City should not forget the historical side. There are so many buildings that have been around since the city was first born. And all of these buildings have a history to go with them. With so many visitors that are enamored with New York City, it is more than possible that many ghostly spirits are as well.