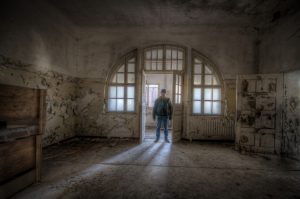 Rolling Hills Asylum, located in East Bethany, New York, was originally known as the Genessee County poor farm and was established in the cold winter of 1826. A ‘poor farm’ or ‘poor house’ (later called an asylum,) was an institution built by the government or a charitable organization to provide housing to orphans, widowed women and their children, the disabled, mentally ill, and minor criminals. The residents were called inmates, regardless of their reasoning of being there, if that gives you any hint as to how they were treated during their stays here…

The Genesee County poor farm was an actual farm. The farm itself was self-sufficient, with residents tending the land and animals as part of their chores. The grounds resembled a reformatory. These types of structures were common in the United States during the 19th and 20th centuries prior to the adoption of the Social Security program in the 1930s. There is also a record of a cemetery located on the grounds of the farm, but it has not yet been discovered. The county would bury those who had no family on the land. The cemetery itself has faded away over the years, with stones crumpling and wearing away in the winds.

When the Genesee County Poor Farm opened its doors in 1827, this was written about it in the Batavia Times newspaper, “Notice is hereby given that the Genesee County Poorhouse will be ready for the reception of paupers on the first day of January 1827 … The Overseers of the Poor of the several towns of the County of Genesee are requested, in all cases of removal of paupers to the county poorhouse, to send with them their clothing, beds, bedding, and such other articles belonging to the paupers as may be necessary and useful to them. The following are eligible for assistance: habitual drunkards, lunatics (one who by disease, grief or accident lost the use of reason or from old age, sickness or weakness was so weak of mind as to be incapable of governing or managing their affairs), paupers (a person with no means of income), state paupers (one who is blind, lame, old or disabled with no income source) or a vagrant.” Times truly have changed, thankfully, in the way we refer to and treat the less fortunate members of our societies. The Rolling Hills Asylum, as it is known now, witnessed over 1,700 documented deaths on the property with hundreds more unrecorded. It is now known as the second most haunted site in the United States.

Rolling Hills and Her Residents

A few tragic stories rolled out of Rolling Hills, each as heartbreaking as the last. One tragic story involved a resident named Roy. Roy suffered from extreme gigantism, a physical deformity that left his face deformed, his hands and feet oversized, and his height well over seven feet.

Roy was the son of a prominent banker in New York, and he was sent to live at the asylum because his family considered him an embarrassment. He was brought to the asylum when he was 12, and died there at the age of 62. He loved opera music and was known in the asylum as a kind, gentle-hearted man. Today, visitors see his hulking shadow lurking throughout the building. One story recorded by Weird NJ told by the owner of the building, Sharon, truly captures Roy’s purity. ‘Sharon tells a story about running into a rat in the infirmary about two months after moving into Rolling Hills. Terrified by it, she screamed and ran away. The very next day she found the rat dead on the stairs, blood oozing from its mouth as if its neck had been broken. On the wall above the rat was a giant bloody handprint. Sharon believes that the ghost of Roy witnessed her distress and killed the rat for her.’

Others at the asylum were power-hungry, and not as kind. One of the nurses in the infirmary, Nurse Emmie, was known for her absolute cruelty. She was feared by the inmates and staff and was even rumored to have performed Satanic rituals and black magic on the residents. Reports have circulated that Nurse Emmie still walks the halls of Rolling Hills, as visitors hear a cackle-like laugh coming from the infirmary today. There have been other reports of cruelty from staff members, but the residents of the asylum did their best in sticking together and protecting each other.

Another paranormal hotspot in the asylum is a room known only as ‘Hattie’s Room.’ Located on the first floor of the East wing, this room has captured voice recordings of an elderly woman yelling ‘hello!’ It is believed that this is the voice of a former patient named Hattie, who was blind, and used to yell hello all day and night to get the attention of the staff and nurses.

Moving upwards in the building, the second-floor men’s dormitory is referred to as the ‘Shadow Hallway,’ a fitting name, since this is a hall where visitors almost always see shadow figures moving about. They walk in and out of doorways, across halls, peek out from behind doors, and even sometimes are seen crawling across the floor.

The psych ward and solitary confinement locations in the asylum are some of the most sinister. Iron brackets protrude out of the cement walls of a small room in the basement, which is believed to have been used to shackle unruly inmates. Sharon explains the horror of this, and that it wasn’t always just criminals who were being locked up here. She says, ‘Back in the day they didn’t understand that you probably had a medical issue: Alzheimer’s, epilepsy, Tourette’s syndrome, Asperger syndrome…or, you were an unruly wife. Back then if a man couldn’t control his wife he’d say, ‘I’m going to lock you up.’ There were many, many reasons why they’d lock you up. So, this area was not good.”

The morgue, of course, is another hotbed for ghostly activity at the asylum. In this room, there is a large embalming table, two large refrigerators, and a huge steel sink. The morgue is rife with paranormal activity to this day, such as items being moved, disembodied voices, and visitors even report being shoved down onto the cold tile here.

Rolling Hills Asylum, A Home Away from Home

There are many theories as to why the asylum is so haunted. One is that it was the only home that some of the residents ever knew. Some of them lost their parents, their homes, their spouses. They built relationships and friendships at the asylum that meant more to them than what came before. They got through tough times with the other inmates here. They’re attached to the property, it was home to them, and many of the spirits of Rolling Hills Asylum consider it just that – an asylum, a safe place. Why would they want to leave?

For more haunted New York, check out what locations made our Top 10 List!