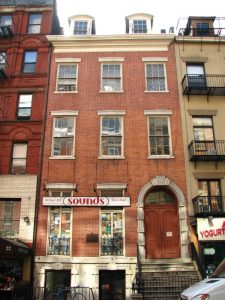 Forget Christmas and New Year’s – the best holiday to celebrate in New York is Halloween. The city’s famous Village Halloween Parade is highly anticipated by locals and tourists alike. This year will mark the epic event’s 42nd anniversary. But what’s so great about the Big Apple is that you never have to wait until October 31st to see some ghosts. At the Old Merchant’s House, anyone can encounter spirits year-round.

The Old Merchant’s House, also known as the Seabury Tredwell House, is located between Lafayette Street and the Bowery. It was built in 1832 by Joseph Brewster, a famous hat maker who ran two very successful shops on Broadway. Brewster thus could afford a home of extreme lavishness. The Old Merchant’s House is a stellar example of transitional Greek Revival architecture. Its four floors are connected by a long, wooden staircase. At its inception, all of the house’s rooms were equipped with the best, mid-19th century furnishings. These included marbled fireplaces, mahogany beds, Grecian couches, Dutch ovens, huge gas chandeliers, even a concert piano. The house’s hallways were also magnificently decorated. They were lit by lead-glass fanlights and carpeted with geometrically-patterned rugs. Only the servants’ quarters were simply designed and less ornate. 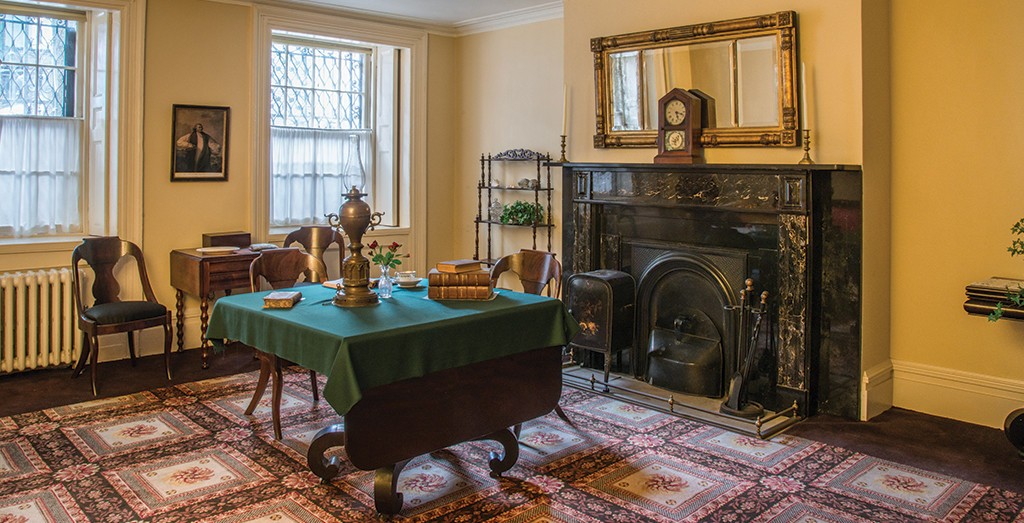 The inside of the house is beautifully designed and furnished.

As the house passed through the Tredwell family, it underwent several changes. New portions, equipped with dumbwaiters, were added to the original structure, for instance. The third floor was also augmented to include more bedrooms. This isn’t a huge surprise since the Tredwell clan included eight children.

Today, the Old Merchant’s House operates as a museum that boasts an impressive collection of the lavish possessions of the Tredwell family. Objects range from works of art to sewing accessories, from family photographs to costumes, from unfinished quilts to greeting cards. The museum is run by The Trustees of the Old Merchant’s House of New York, Incorporated. Since acquiring the property in 1936, the organization has worked hard to keep its original splendor well intact. The Old Merchant’s House became recognized as a National Historic Landmark in 1965, and then a New York City interior landmark in 1981.

Those invited to the house by the Tredwell clan experienced luxury at its finest. They would first pass through a set of double doors, which led into a gilded parlor. During the mansion’s heydays, this beautiful room hosted many weddings, social gatherings, and memorial services. Today, reenactments of traditional mid-19th century funerals are held there every October. It “is dressed in accordance with the standards of Victorian high mourning: windows shuttered, curtains drawn, wall portraits and mirrors wrapped in black crepe.”1 Though these funerals may be fake, the ghosts at the house certainly aren’t! 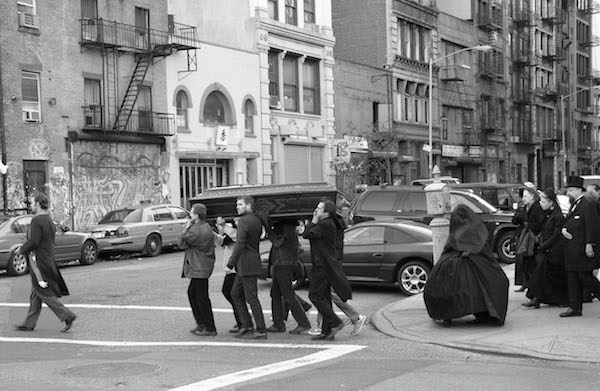 A funeral outside the house.

The second and third floors were dedicated to the house’s bedrooms. Bedrooms were painted in oyster white and many had their own fireplaces.  Since the Old Merchant’s House had its own coal room (located in the basement), guests never had to worry about staying warm. The basement also included a dining room, a pantry, and two closets. It was where the Tredwells entertained guests and hosted feasts.

The house is located on East 4th Street, and its bright red color makes it stand out from surrounding buildings. It has a slated gable roof and a small garden in its backyard. Everything about the Old Merchant’s House communicates extravagance. Thus, when Seabury Tredwell purchased the property from Brewster in 1835, it cost him $18,0002, a price considered to be very high at the time. 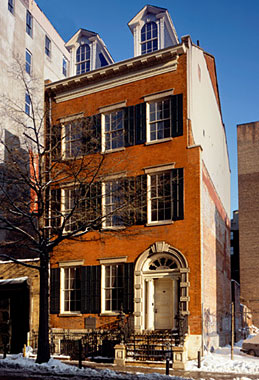 The eye-catching exterior facade of the house.

Tredwell was a successful hardware merchant from Long Island. When he and his wife, Eliza Parker, moved into the Old Merchant’s House, they had their seventh child, Sarah. Their last child, Gertrude, was born five years later. She was the last of the Tredwell’s to live in the mansion and is its most famous ghost.

Gertrude’s story is a very sad one. She became estranged from her father because he refused to let her marry a young doctor she had fallen in love with. She died a spinster, at the age of ninety-three, “in the same room in the same bed in which she had been born.”3 Her spirit is said to still watch over the building4. In one instance, back in 1933, Gertrude’s ghost “came rushing out the front door”5 to shoo away a group of children playing on the lawn. She and her dead siblings have since become well-recognized by locals. One woman claims to have had a full conversation with Samuel Tredwell, before realizing he was a ghost. No wonder the Old Merchant’s House was once dubbed “Manhattan’s most haunted house”6 by The New York Times. 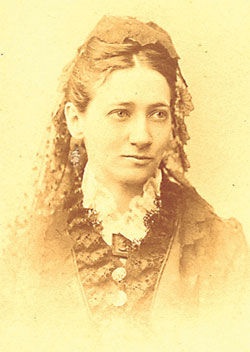 A photograph of a  young Gertrude Tredwell.

Other spooky things have been reported at the Old Merchant’s House. Visitors have seen objects move on their own in the kitchen, for instance, and smelled tobacco in Seabury’s bedroom. Ghost hunters have also picked up strong EVP readings in the servants’ quarters. The mansion’s first floor, front parlor is especially paranormally active. Phantom notes are often heard from its piano, snores from its Grecian sofa.

After Gertrude passed away, the Old Merchant’s House was acquired by a grand-nephew of the Tredwell family, named George Chapman. Before Gertrude died, she had been struggling financially and had arranged for the house to be auctioned off in order to pay off her debts. Chapman managed to step in and save the house from being sold. As its new owner, he decided to transform the building into a museum. The Merchant’s House Museum has drawn in flocks of tourists since it opened its doors on May 7, 1936. Then, after George Chapman died, the Decorators Club of New York City took over and continued to restore the property. They struggled especially in 1968 because the building became significantly ruined by water damage. An acclaimed architect from New York University, Joseph Roberto, was hired to help with all the repairs. Thanks to his advisory, the Old Merchant’s House began to slowly gain back its original opulence. 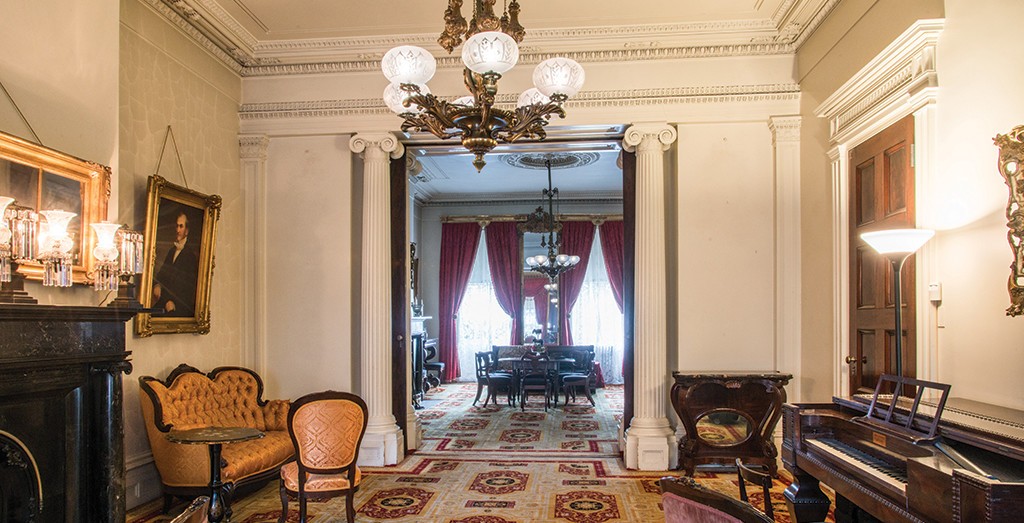 Welcome to the Old Merchant’s House, where you’ll find opulence in every room.

But it was only in recent years that the Merchant’s House Museum began to embrace is a high level of hauntedness. “We’ve found that by not ignoring [this] part of the museum, we’re able to introduce it to new audiences that may not be as interested in a historic house museum without the paranormal angle,”7 said curator Emily Wright in July.

“It’s safe to say that each year we average roughly a half-dozen documented reports of occurrences to staff, workers, or visitors,”8 continues Anthony Bellov, a museum board member. Indeed, strange, unexplainable things happen often at the Old Merchant’s House. Every employee has at least one spooky story to share with visitors. Andrea Janes, who once volunteered at the museum, would “get the feeling that someone was looking over her shoulder at the book she was reading. She also felt someone brush her arm and move past her while training for a tour. ‘I’ve had moments that have caught me off guard in the house [and] I’m not a particularly psychic person,’ Janes says. ‘A lot of the staff members are downright skeptical, but even they have to admit there’s something going on.’”9 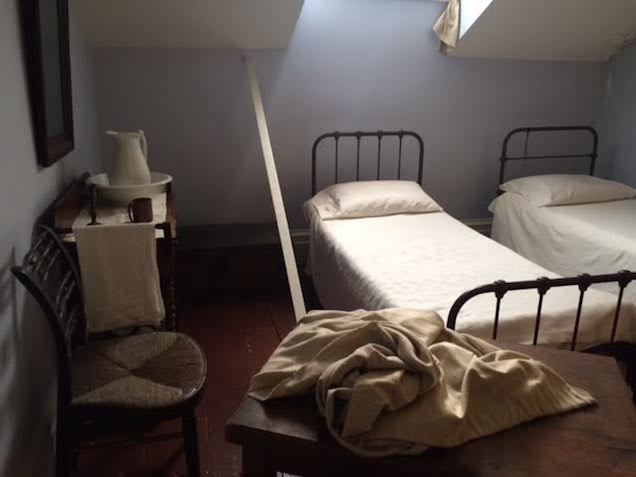 One of the bedrooms in the house.

One of the most frequently seen apparitions at the Old Merchant’s House is that of a woman wearing a brown dress, who is probably one of the Tredwells’ six daughters. A lady in a long, black gown has also been spotted at the house. But even if visitors don’t see the Tredwell girls, they certainly can sense them. Weird feelings, the awareness of being watched, a sudden chill – these are commonly experienced at the Old Merchant’s House.

The Merchant’s House Museum lets visitors conduct self-guided tours on the property. They do provide a useful guidebook, though. It gives an overview of the house’s history and rehashes some of its most chilling tales. So famous is the mansion’s haunting that many tourists bring ghost detecting devices with them. Kelly Conaboy of Gawker.com opted to also use “two ghost hunting iPhone applications: ‘Ghost Hunter M2’and ‘iEMF. ’”10 Though she did not pick up much while in the garden, she got several readings when she was in Seabury’s bedroom.

In 2011, a team of ghost hunters from Sturges Paranormal investigated the house. They collected a bunch of evidence there, including a photograph of a shadowy figure11 in a mirror. As for EVPs, they got several readings. One was recorded in Seabury’s bedroom. “The first clip you will hear John Galvin ask a question with no response. The second clip you hear the same question but you will hear what sounds like bells ringing right after John asks his question.”12 Another was documented in the front parlor. A conversation between psychic Cathy Towle, a museum board member, and a Sturges Paranormal member is joined by a ghost “using some salty language.”13 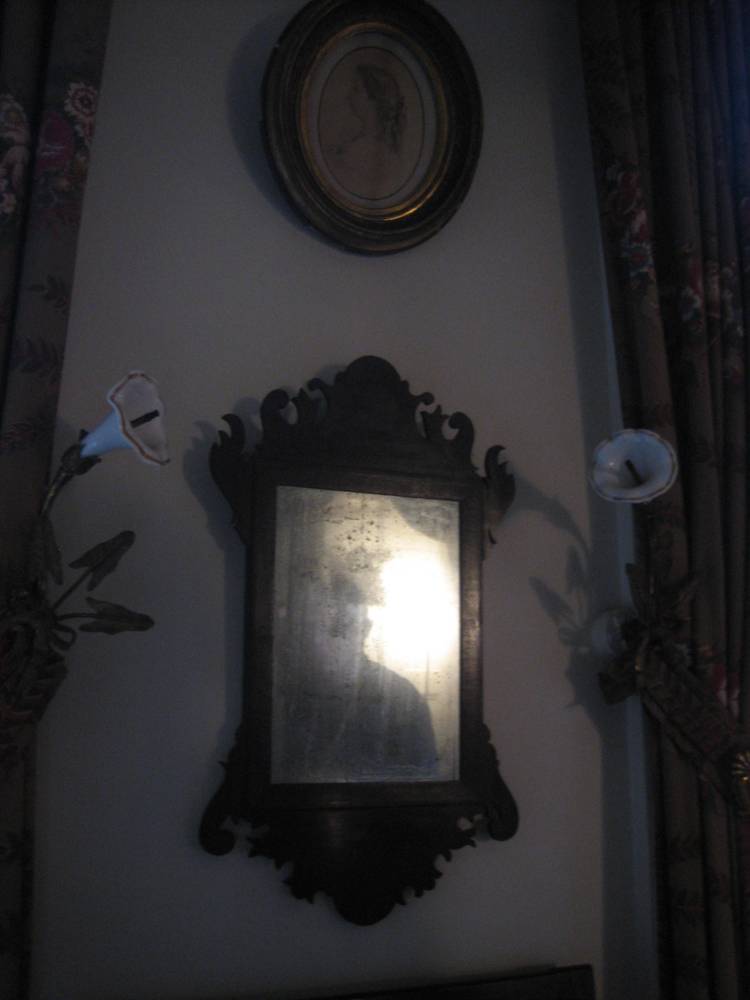 Sturges Paranormal captured a shadowy reflection in a mirror.

Though you can visit it year-round, October is definitely the best time to stop by the Old Merchant’s House. The museum offers “spirited”14 events during the month. These include lectures, reenactments, and scary candlelit tours. Whether you’re a trained medium, a paranormal expert, or a ghost hunting newbie, you’ll certainly have a memorable time at the Old Merchant’s House!