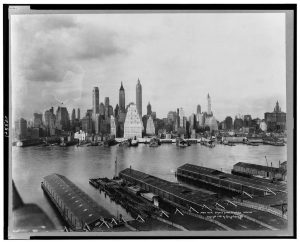 Museums capture the mind and imagination of those who visit them, allowing a glimpse into what life was like before we were born. New York City alone has over 100 museums to choose from. Here is a small list of some of New York City’s Haunted Museums!

Museum of the Moving Image

The story of the Museum of the Moving Image began in 1981 at the museum’s inception. The museum was started to preserve and advance the understanding of film, television, and digital media. Today the museum and its online exhibition are home to over 130,000 artifacts from every single stage of producing, promoting, and exhibiting motion pictures, digital media, television, and pre-cinema optical toys.

Since its opening in 1988, the Museum of the Moving Image has been recognized as a major internationally-reputed institution and the ONLY museum in the United States dedicated to exploring the art, history, and technology of the ‘moving image.’

The museum itself occupies one of the thirteen buildings that made up the former Astoria Studio complex, built by Paramount in 1920. The studio was the site of hundreds of silent and early sound era films and productions. Taken over in 1942 by the U.S. Army to produce WWII training films, it was used up until 1970 and soon fell into disrepair. In 1977, the complex was restored and added to the National Register of Historic Places a year later.

These days, visitors to the museum report disembodied footsteps, bangs, bumps, unexplainable voices, and even a particular full-bodied apparition, a woman in a white dress. She has been seen by countless eyewitnesses and even caught on security cameras after the museum has been cleared of visitors. Could she be a former starlet who once acted in the Astoria Studio?

The Museum of the Moving Image calls out to all hardcore cinephiles and those who just enjoy a good movie every once in a while to come explore and learn of the history of film. You may also be lucky enough to see the Woman in White during your visit!

Ellis Island is one of New York’s most popular attractions. The immigration station on the island witnessed hundreds of thousands of immigrants pass through it. A new life was on the horizon for the people who flocked here, escaping the darkness or unfair treatment that resided in their home countries. Ellis Island may seem like a heavenly escape, but many people don’t realize that over 3,500 people died right here on the island. Many of these deceased souls never made it past the screening process, dying shortly after their arrival due to illness. One out of every five people who walked through was marked with chalk, a sign to show that they were suffering from some sort of health problem and would have to be taken from their families to receive treatment at one of the city’s nearby hospitals.

Imagine… you arrive in a new land with your family in tow, your small children crying, your spouse afraid. You’ve been suffering from a thick cough for the past week, and your first day on U.S. soil is spent being carted away to a quarantine wing in a strange hospital with doctors speaking an unknown language, talking to each other about how you may have Tuberculosis or Pneumonia. Now your children and spouse are all alone, forced to fend for themselves while you recover… if you do.

Author of ‘Forgotten Ellis Island,’ Lorie Conway, stated that ‘tens of thousands of people were taken to the hospital. It’s called the island of hope – 350 babies were born in this hospital – and its called the island of tears – 3,500 immigrants died in the hospital, and many died penniless and were buried in pauper’s graves.’ To protect the nation from illnesses that immigrants arrived with, the Ellis Island hospital had one of the best infectious disease facilities in the world. The staff at Ellis Island were told to treat the immigrants with dignity and the utmost respect, but the feelings of anti-immigration were strong at that time. ‘Eugenics was a hard science at the turn of the century and a lot of people, members of congress even, believed in eugenics that held the American gene pool was being poisoned and polluted by the immigrant stock that was interbreeding and intermarrying in America at that time.’ Conway said.

Between 1909 and 1911, 420 people died in quarantine in two separate hospitals on the island. 85% of those who died were children under the age of thirteen. Ellis Island finally closed in 1954, and the immigrant center is now restored to a museum to remember it all. The spirits of Ellis Island live on here, however. A former chief ranger for the historic site reports hearing disembodied children’s voices and laughter from the museum’s Great Hall one evening. When he got up to check it out, he found no one. Visitors report hearing doors opening and closing on their own, as well as muffled crying. Others have heard furniture moving around, again, only to find the room where they heard the commotion empty and void of living people.

Even the Statue of Liberty is reportedly haunted, with visitors seeing spectral lights that float around the head of the monument, as well as ghostly white faces peering out from her crown!

Ellis Island truly was a gateway to a better life for the immigrants that passed through here. The Statue of Liberty and the bright side of Ellis Island are remembered by those who made it through alive. Rueben Barrett is one of those people. He was four years old when he arrived at Ellis Island from Poland with his siblings and mother. He remembers climbing the grand stairs and seeing men in uniforms. He was one of many who was taken to the hospital, as he had a case of ringworm. As one of its last living patients, he came back to Ellis Island 78 years later. He tells of how friendly the nurses were and how they taught him English; he recalls being happy and enjoying his hospital stay. Rueben remembers seeing the Statue of Liberty and how she made his mother smile.

Known formerly as the Old Merchant’s House and as the Seabury-Tredwell House, it is the only nineteenth-century family home in New York City that is still in-tact both inside and out. Built in 1832 by Joseph Brewster, it’s located at 29 E. 4th Street. It became a museum in 1936 when it was founded by George Chapman, a cousin of the family who once occupied the home. The home was filled with the Brewster family for generations, with an assortment of brothers, sisters, nieces, nephews, aunts, uncles, and other relatives all coming through it. Gertrude, the youngest member of the immediate family, lived alone at the home for 24 years after her sister Julia’s death in 1909. As she aged, she became more eccentric and obsessed with holding onto the elegant home in a neighborhood that was rapidly modernizing and changing. After her death in 1933, George Chapman bought the house and established the museum inside of it.

The museum itself presents original furniture, architecture and allows visitors to see what life was really like for an upper-class 19th century New York family. The museum houses over 3,000 items and possessions of the wealthy merchant-class family who lived in the home, including furniture, decorative items, clothing, household items, books, and photographs.

Now considered ‘the most haunted house in Manhattan,’ the home is said to be occupied by many members of the Tredwell family, especially Gertrude, the daughter who grew very fond of the home in her old age. Staff and guests have heard the sound of pianos playing and witnesses unexplainable lights. Some have even seen the apparition of a woman in a brown dress moving throughout the home, room to room. Could this be Gertrude checking in on her home?

New York as a whole is historic and beautiful, each borough and block different than the last. Have you ever visited any of these haunted museums in New York? For a truly spooky read, check out the cursed island that lies just outside of New York City!