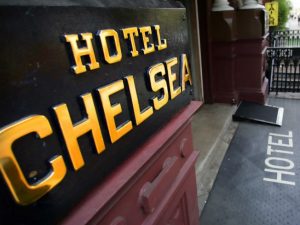 The Chelsea Hotel can be found at 222 West 23rd Street. It is between eight and seventh avenue. It is a brick building featuring beautiful bold red bricks. It has two different styles. It features a Queen Anne and Victorian Gothic style. The balconies have wrought iron and there is a grand staircase that can be found in the middle of the hotel. 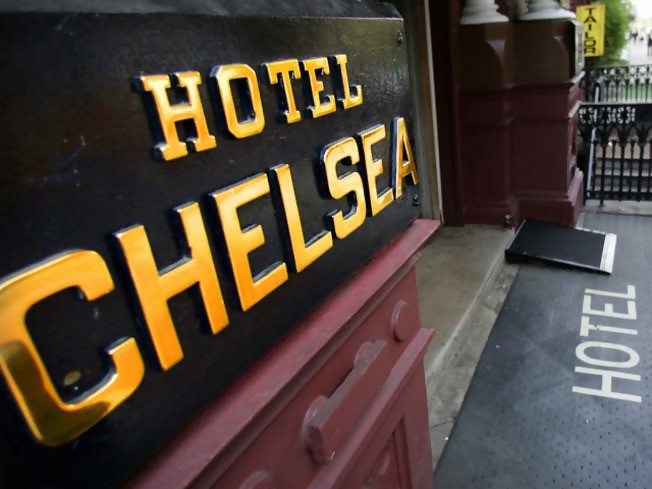 The halls of the hotel are now covered with dust. The many paintings that were once on the walls have been put away in storage. The abandoned apartments are now padlocked and washed out. The hotel had closed its doors in 2011. This was the first time it had closed in 106 years. There are a few remaining residents. They roam the halls as ghosts. The ghosts have watched the workers haul out many antiques such as molding and stained glass. They have also removed entire walls. The pipes in the building have burst because they were so old. Even during renovations, the pipes were bursting. This caused many apartments to flood and some of the tenants returned home to their front doors sealed off with plastic wrap. The current owners say that the building is in disrepair. They are working to restore it to the original condition. However, many residents believe they have been forced out and that the hotel is over. 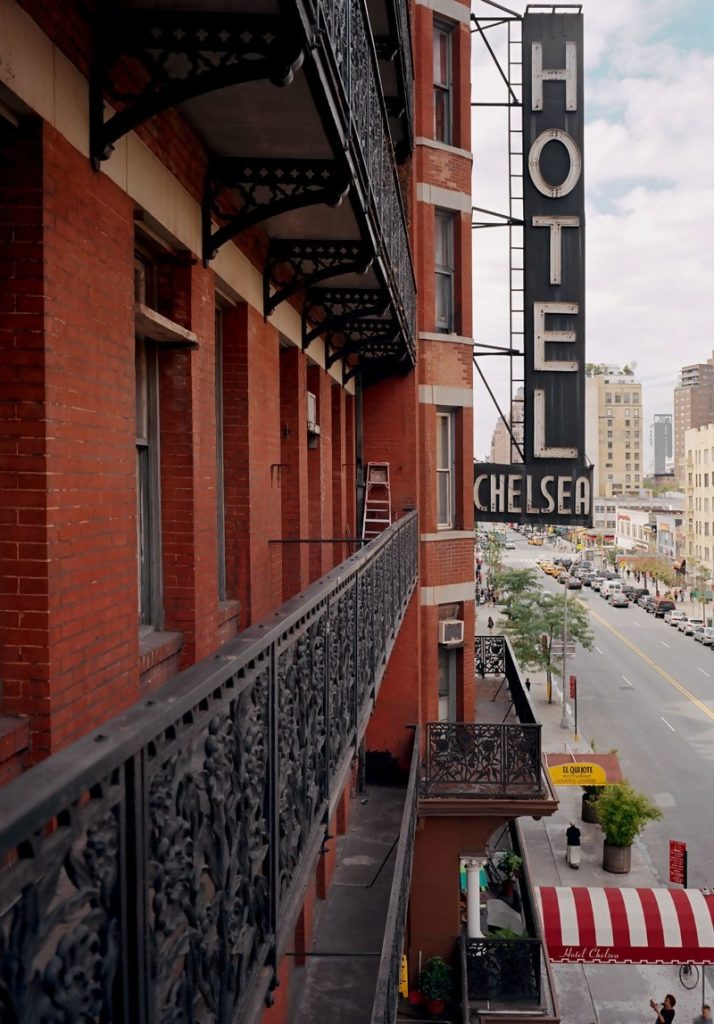 Although the hotel is not in pristine condition today, it holds many stories. The hotel was conceived as a utopian for socialists. The architect that built the hotel was named Phillip Hubert. He was raised to be devoted to following Charles Fourier’s theories. Charles was a French Philosopher. It was Charles who thought that there should be self-contained settlements. These settlements should meet the needs of everyone. Everyone who was in any profession should have all the personal needs they should want. The stock market had crashed in 1973. It was at this time that Philip Hubert decided that he would do a Fourierian experiment. He had planned to build apartment houses in the city. These apartments would be cooperative. This meant that the tenants of the apartments would be saving money by sharing services and fuel. This was the first co-op housing in New York. It turned out to be extremely successful. The Chelsea had opened in 1884.

Hubert wanted to follow the philosophy of Fourier. He reserved the apartments for those who had built the structure. This would include the construction workers, electricians, plumbers, and interior designers. Hubert decided to surround these workers with musicians, writers, and actors. The top floor of the hotel was designed with fifteen different studios for artists. There were paintings hunt in the common dining room from the Hudson River School. The ceiling and halls were decorated with natural items. The Chelsea was the tallest in the city at this time. It had twelve stories.

In 1905, Hubert went bankrupt. The Chelsea was no longer apartments but was converted to a luxury hotel. The hotel was visited regularly by many famous individuals. Some people who visited frequently include William Dean Howells, Mark Twain, and John Sloan. Once World War II ended, the room prices fell due to the decline of the hotel.

As the priced dropped it attracted many other people including Virgil Thomson and Dylan Thomas. The death of Dylan Thomas in 1953 has enhanced the legend of the hotel.  There have been many notable people living in these apartments.

After the divorce from Marilyn Monroe, Arthur Miller had moved into room 614. Bob Dylan had written the book Sara in room 211. There are so many notable moments that this hotel has had.

In the last half of a century that the hotel was in operation, it was used as an artists’ colony. This was informal. The artist would trade their paintings for rent. Many would live in the building for free by simply trading their paintings. Many people who were troubled children of extremely rich people would also live here. It was artists and troubled children who were drawn to these apartments. Many tourists from the world would pay for their rooms to allow them to sit in the lobby and take in the art. This was turned into a living museum. The curator of the museum was also the gatekeeper. He was in charge of who would be allowed into the hotel/apartments and for how much. The man’s name was Stanley Bard. The father of Stanley was one of the three men who bought the hotel during its decline in 1943. It was Stanley who took over the management position in the 70s. Stanley has been called a number of names. He was known as the best landlord ever and to others, he was a starfucker. However, he was recently forced out by the other two owners. The other two had wanted to sell the hotel against the wishes of Stanley. The hotel was sold to Joseph Chetrit. He bought the hotel for about eighty million dollars. Joeseph had refused to talk to any type of press. The property was sold to King & Grove. This is a hotel chain that is working on renovating the property. The renovations are said to cost around forty million dollars.

Many people refer to the Chelsea Hotel as a cauldron of creativity. Many people ask why so many artists and radicals were drawn to the hotel. The next question is part of the answer. Many people also ask why there are so many ghosts at the hotel.

The hotel is a landmark building. It is both a state and national landmark. It is considered to be one of the most haunted places in New York. One of the most famous ghost stories is that of Mary.

Mary was a survivor of the Titanic. She is well-known for haunting the fifth floor of the hotel. The story goes like this. Mary had lost her husband when the Titanic sank and she survived. It was after this that Mary was very depressed and distraught. It is said that she never could adjust quite right to life around her after the Titanic had sunk. Mary had hung herself in her room that was on the fifth floor.

You can find Mary at the western end of the building. She is often seen under the archway that you see in the hallway. This is where the original entryway is located. It is said that Mary is always checking herself in the mirror. Marry is known as the vain ghost. It is important that you do not disturb Mary. She does not like the living and considers them annoying.

Another ghost is Nadia. She is considered the severed hand ghost. It was ten years after Mary had hung herself that the Times had reported about a young woman flinging herself out the window. The woman was believed to be in her twenties. She had died on the sidewalk of 23rd street. Before she had jumped out of the winder, she had grabbed a pair of industrial scissors. These scissors were used to cut thick cloth in bolts. She had placed her hand in the middle of these scissors and closed them. The scissors had managed to cut off her right hand. Nadia did not expect the pain to be this intense and she decided to kill herself by jumping out the window.

Nadia had cut off her hand for a few reasons. She was an artist and wanted to pursue her plans. However, when she was still a teenager, this vision was gone because she had met a handsome man. This man and she ran away to get married. Within a few years, she had two children and an alcoholic husband. She had nowhere to go so she returned to the hotel to plead with her wealthy father. He let the family return to the hotel, however, she would responsible for all the cleaning and housework. She would also be in charge of piece-work. Lastly, Nadia had to wash the underthings of her mother. Because her hands were not used for her art, she felt they were becoming ruined. She decided to cut off the right hand after this. It is said that you can still see the ghost of Nadia trying to get inside the hotel. It is said she cannot find her way back.