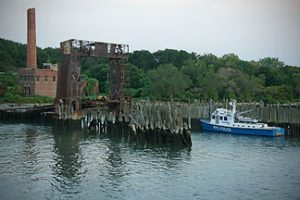 Just a few miles away from the prominent New York island of Manhattan lies a thirteen-acre piece of land located in the East River. This island bears the remains of its tragically fascinating history. North Brother Island was first inhabited when Riverside Hospital was relocated to the island due to the hospital’s nature and the highly contagious diseases it treated. The hopes were to isolate sufferers of smallpox, tuberculosis, yellow fever, and typhus. It seems like a worthy and respectable pursuit until you learn that many of the patients of Riverside Hospital were held against their will.

The most notorious patient of Riverside Hospital was, you guessed it, Mary Mallon, better known as ‘Typhoid Mary.’ Mary was the first person in the United States to be documented as an asymptomatic carrier of the bacteria that causes Typhoid Fever.

Mary is said to have inadvertently infected more than fifty people, 3 of which died. She always denied her status as a carrier, saying that she was forcefully kept in the island’s hospital for nearly three decades until she died.

A Bit of Mary’s History

Mary Mallon was born in 1869 in Ireland and immigrated to the United States in 1884. She worked a variety of domestic positions and ended up settling in her career as a home cook for a wealthy man named Charles Henry Warren, a strange and worrisome position for someone who was a healthy carrier of Salmonella typhi, or the bacteria that causes Typhoid Fever. Six of the eleven people living in the home presented with Typhoid Fever after Mary had started work there. At this point in history, Typhoid Fever was still fatal in 10% of cases.

Mary’s illness was discovered by the sanitary engineer that had been hired by the Warren family, George Sober. Initially believing that freshwater clams were the cause of the spread, he had held interrogations with those who presented with symptoms, including Mary. She had contracted the disease and continued to host the bacteria, contaminating everything around her and threatening her surrounding environment. Starting in March of 1907, Sober had solved the mystery and became the first to present the ‘asymptomatic carrier’ position. He began to stalk Mary in Manhattan, revealing that she transmitted the disease and death by her activity. His attempts to sample Mary’s feces, urine, and blood earned him nothing. He was finally able to prove his suspicions when he discovered that she had worked for eight other families, all of which had cases of Typhoid Fever present in their homes after Mary had begun working for them.

After presenting his findings to Dr. Biggs of the New York Department of Health, the police retrieved Mary and brought her in for testing. She remained uncooperative and eluded them for five hours. Once they caught up to her, she was forced to give samples, and it was found that Mary’s stool was positive for Salmonella typhi. She was transferred to North Brother Island and Riverside Hospital immediately, where she was quarantined. In 1909, Mary successfully sued the health department, saying that no one explained the significance of being a carrier and was unsuccessfully ‘treated’ with laxatives. She was offered a gallbladder removal surgery, but she denied it. Mary was eventually released under the condition that she would not be in contact with food. She did not abide by this agreement and immediately started working in cuisines, threatening everyone’s health around her once more.

As a cook of the Sloane Maternity in Manhattan, she infected at least 25 people, two of which died. She ended up getting caught and yet again was sent to Riverside Hospital on North Brother Island, where she remained until her death in November of 1938. After her death, it was realized that she shed the bacteria from her gallstones, which raised the issue of what would have happened if she had agreed to the gallbladder removal surgery she was offered the first few days she was at the hospital. Typhoid Mary isn’t the only reason for the island’s notoriety, however.

The Tragedy of the General Slocum

Three years before Mary’s arrival on the island in 1904, a tragedy took place on the island, considered the biggest loss of life in New York City in the 19th century. On June 14th, 1904, a church group chartered the vessel General Slocum for a women’s and children’s picnic trip to Long Island. As it sailed along the East River, a fire broke out in one of the vessel’s machine rooms. By the time the captain noticed the fire, it was too late for anyone to quell the blaze, and disaster was imminent. The fire quickly spread to other parts of the ship, including a cabin filled with gasoline. What’s genuinely horrible is a twelve-year-old boy had attempted to warn the captain of the blaze but was ignored. The boat finally sank beneath the East River’s surface right on the banks of North Brother Island, and 1021 people had died.

Staff and patients of Riverside Hospital acted as rescuers and pulled bodies from the water. The captain of the General Slocum was held accountable for failing to maintain proper fire drills and extinguishers. The tragedy was not long remembered, as the sinking of the Titanic happened only a few years later.

Back To North Brother Island

Today, the eerie ruins of twelve buildings and Riverside Hospital remain, overgrown with plant life and riddled with birds. Riverside Hospital eventually became housing for WWII veterans and then a drug rehabilitation center in the 50s and 60s, but was forced to close in 1964 after widespread reports of staff corruption and has sat abandoned for over half a century. The island itself is strongly believed to be haunted. There was even a morgue on the island for those who didn’t survive their quarantine. The island is also thought to be cursed due to its spotty history.

First used as a landfill, then a hotspot for multiple quarantine hospitals. The patients who ended up here were sometimes never heard from again, as there was no telephone service on the island, and visitors were prohibited. Conditions were horrible, with some patients living in tents outside if the hospital itself was too crowded. Food shortages and lack of heat in the winter contributed to the island’s growing death toll. The island’s manmade structures remain in a state of disarray while the nature around them flourishes and consumes them. Urban explorers and photographers have found their way onto the island and state that it is truly a sublime experience. They tell of the feeling of walking through the brush onto the island, being surrounded by trees, birds of all kinds, and towered over by a canopy of large trees; you forget that you’re right in the middle of New York City.

They also tell of the hauntings that have occurred here. Visitors to the island report screams from the middle of the island and coming from the ruins of Riverside Hospital. Of course, a lot of noise comes across the water from Rikers, but the noises heard on North Brother are entirely too close to be coming from the prison. Whispers, unexplained movement, glowing orbs, and apparitions of people in hospital gowns have also been reported. The past here has opened the door for plenty of paranormal activity, and some visitors have even seen apparitions of remnants of a boat floating in the water. If you look out to North Brother Island from Manhattan at nighttime, you may even catch a glimpse of spirits out on the shores.

To reach North Brother Island, you have to go by boat. To charter a boat to the island, you’ll need the city’s permission. The journey is rife with police, as they keep an eye on Riker’s Island nearby. Any thoughts of sneaking onto the island should be put to rest, as the island is dangerous without a guide, and you will be charged with trespassing. If you’d like to stay on the mainland, check out our article covering New York City’s haunted museums!