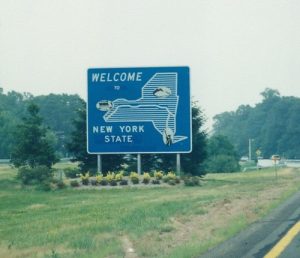 Lovingly referred to as ‘The Empire State,’ New York is chock full of history, good and bad. Previously inhabited by members of the Haudenosaunee and Algonquian Native American tribes, New York has quickly built city centers capable of sustaining over 10 million people. As one of America’s most populated states, New York has seen its fair share of history throughout the ages, with it being one of the very first thirteen colonies formed.

With its age, population, and long-time status as an immigration hub, New York has been called home by all walks of life, as well as all kinds of those who are no longer alive. Below we’ve gathered a few haunted hotspots around the state, so read on, and learn about some of the most haunted locations in New York.

Onondaga Hill is haunted by the souls lost in a tragic car accident that occurred on Cedarvale Road just 10 miles outside of Syracuse over sixty years ago. Since the brutal accident, it’s been said that the road itself, which is better known by its nickname ’13 Curves,’ has been haunted by the lost souls who died tragically years before. There are a variety of ways the story has been told over the years about how the road and its twisting curves have become so haunted, but the most credible legend states that the car accident involved a newly married couple who were finding their way around the ominous curves of the road when they lost control of the vehicle, veering off the road into a nearby creek. The impact of the accident killed the bride and groom instantly. Reports today state apparitions of a woman standing at the side of the road looking lost, a man seen covered head to toe in blood, and even the apparition of someone carrying a glowing orange lantern has been reported.

In some instances, those who have encountered the phantom woman recall feeling an extreme sense of sadness and loneliness and feeling as though they are searching for something they know they will never find. Is this how this woman’s spirit feels? Is she stuck on the 13 Curves for eternity, searching in vain?

The Bishop/Gillette headstone is in Lakeview Cemetery on Elm Street in Penn Yan, New York. While cemeteries are usually known for being uncomfortable or spooky, one headstone here truly has made a name for itself. The ‘Lady in Granite’ is the gravestone for the Gillette family, and the spirit is believed to be that of Matilda Gillette. The image of her head appeared mysteriously on the dark granite stone, and nothing has been able to remove the stain even with repeated sanding and polishing; Matilda’s likeness always returns. Legend has it that more and more of her image will appear over time, as she refused to be forgotten when she passed away.

Split Rock was once used as a hazardous munitions plant, and the history here is genuinely tragic. In 1918, the plant unexpectedly exploded, brutally killing more than 50 men working that day. The land was forever changed here, their families never the same as well.

Today, the Quarry is nothing but an abandoned location of rocks with an old piece of machinery left behind called ‘The Crusher.’ Visitors to the Quarry leave with reports of disembodied voices, footsteps, and even the revving of the Crusher’s engine, which hasn’t functioned since the horrific explosion.

A much-loved part of Monroe County, Durand Eastman Park has been the subject of many happy memories for New York residents and the antagonist in some of the most nerve-wracking stories locals of the area tell. The 900-acre park is a popular place to relax and breathe fresh air. An apparition by the name of ‘The Lady of The Lake’ also relaxes here, haunting the park grounds and those that visit.

Over the years, the Lady of The Lake’s stories vary, but one prominent report involves the disappearance of a mother’s young daughter. Before the park came to be what it is today, the area was made up of lush farmlands. During the 1800s, a farmer’s wife was known to be overprotective of her teenage daughter. One night, the girl has had enough of her mother’s overbearing ways and snuck off with a local farmer boy. After realizing that her daughter was not going to come home when she didn’t return for weeks, her mother committed suicide by throwing herself into Lake Ontario. Park-goers in and around Durand Lake now report the Lady of The Lake’s apparition, sometimes standing on the banks, sometimes swimming in the waters. A recent storm even revealed an inner part of a tree that resembled a woman in a white gown, which stirred up the Lady of The Lake’s history once more.

One of many ‘Gravity Hills’ in the U.S., Spook Hill is said to defy all laws of physics and gravity. But why? The story goes that a nearby Native American burial site and chief are responsible for the strange happenings and forces that occur at the hill. According to reports, once a visitor’s car is put into neutral at the top of the hill, it will start to move uphill on its own, backward. The directions from Haunted History Trail are as follows, ‘Follow Route 364 through Potter and Middlesex. Turn left onto South Vine Valley Road. Turn left onto Newell Road. Drive to the top of the big hill, and when you get to the top, you will descend a little bit. There will be a driveway on the right and then a sign for Spike Road on the left. Before Spike Road and a little before the driveway on the right, you will want to stop and put your car in neutral.’ Soon after, your car will slowly start to move back up the hill! Could this be energies left behind at the Native American burial site? Or is this just a case of an optical illusion? Visit the hill and decide for yourself!

The Mystery Spot of Lake George

A popular summer destination, beautiful Lake George has borne witness to countless happy, relaxed visitors. Children’s laughter echoes throughout the lake, excitement bubbles at every turn of the winding mountain roads. Everything at Lake George seems to come together and make sense. That is, except for the lake’s famous ‘Mystery Spot.’

Another scientifically charged paranormal phenomenon, there sits a peculiar spot inside Mayor Blais Park on Beach Road. Legend tells that a great Native American tribal leader once shouted all of his tribe’s wisdom here for the lake, mountains, and far away landscape to hear. These days, the spot sits as a perplexing audio phenomenon, stumping visitors and scientists alike for decades. Visitors are instructed to stand in the center of the spot, speak out loud, and wait for your voice to come back to you. It is said that your voice, strangely, will come back much louder than when it left your mouth, almost as if you are talking inside of a small cone. It is said that only you will be able to hear your voice’s echo, almost as if it is returning to you from another dimension. The spot’s acoustics make your voice sound small, while others outside of the center will hear you as loud and clear as you are.

Theories range as to how the mystery spot works, but no one has been able to figure out precisely what causes the phenomena.

New York seems to be bubbling with spiritual and scientific paranormal phenomena, the energy of the state providing the perfect homeostasis for spirits and ghouls to run rampant. This list is not complete, however, and more locations will be shared next month! But for now, check out our Top 10 Most Haunted Locations in New York list for more!