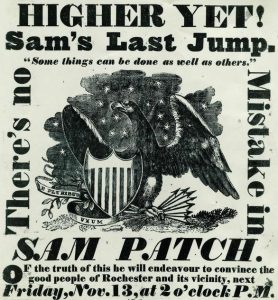 Friday the 13th has been considered a day of misfortune and woe for centuries. In New York alone, two notable deaths occurred on a Friday the 13th. The first (in)famous Friday the 13th demise in the state was the lethal jump of early American daredevil (think: Evel Knievel) Sam Patch.

Patch plummeted to his death in the Genesee Falls in Rochester, New York on November 13th, 1829—a Friday. Why and how would a man at the height of his hard-earned fame and fortune fail so severely at such a stunt after so many successes? Learn the life, death, and legacy of this direly unlucky New York folk hero below:

The Life of Sam Patch

Sam Patch was born into humble beginnings. Though little is known of his early life, historian Paul E. Johnson, who literally wrote the book on Patch (Sam Patch, the Famous Jumper), has deduced that the daredevil’s childhood was unhappy.

Born in North Reading, Massachusetts in 1799 (though some sources believe his birth year to be 1807) to Abigail and Greenleaf Patch, Sam Patch grew up in Pawtucket, Rhode Island. His father was an alcoholic with a bad reputation and hefty debt who eventually left the family. In 1818, Patch’s mother divorced his father, which was a rarity at the time.

Even though he was a minor, Patch was put to work in a textile mill to help support his family. Work at the mill was grueling and dull, but Patch was skilled at his craft. He was promoted to a managerial role at the mill (“boss spinner”) which was, again, a rarity at the time, as most boss spinners were brought in from England.

While in Pawtucket, Patch took up the practice that would later end him: falls jumping. He joined a group of fellow young workers who, in their boredom, passed their free time by drinking and leaping 100-feet off the six-story stone mill into a deep pool by the Pawtucket Falls. Early on, Patch showed a natural ability for jumping, managing more complicated moves and higher heights than his peers.

Patch was quickly hooked. His love of attention and fame, alcohol, and troublemaking all combined in one activity. Except, unlike the other, casual jumpers, Patch wasn’t content to only falls jump for fun. He wanted to make a life out of it.

Sam Patch: “The Most Famous Bridge Jumper That Ever Lived”

Sam Patch moved to Paterson, New Jersey in his 20s. During his time in Paterson, Patch established quite the reputation for himself. He was considered to be a harsh, difficult boss and heavy drinker with a major chip on his shoulder toward anyone he perceived as being better than him.

In September 1827, Patch decided to take a stand—or rather, a jump—against architect, builder, and developer Timothy Crane. At the time, Crane had been working on a toll bridge over Passaic Falls, which aggravated many in the area, including Patch.

Patch made no effort to hide his plan: to disrupt the opening ceremony of the toll bridge by jumping into Passaic Falls. He openly spoke about his protest plan. His honesty landed him in a locked basement the day of the opening ceremony, as Crane had gotten word of the jumper’s plan.

Of course, there’s no keeping a good man down. Patch broke out of the basement. He rushed to the ceremony, wearing only a shirt and underwear. In front of a cheering crowd, he leapt 70 feet down into the falls. His unique diving style was cannonball-first, then a more graceful, arrow-straight, feet-first entry.

A consummate showman from the very start, this first jump was not without its theatrics. When he plunged down into the water, he stayed underwater, holding his breath for as long as possible. By Patch seemingly disappearing into the water below, his onlookers were left in an increasingly-frenzied state of shock and excitement. When Patch later popped back up, the crowd roared. This would become a signature of Patch’s jumping performances until his very last jump.

Patch’s first protest jump made him a folk hero in the eyes of the working class. Here was a blue-collar man brazenly defying the law and order of wealthier, upper class, property-owning men. For context, this era of American history was one in which only property-owning, native-born white men were allowed to vote.

These restrictions disenfranchised many Americans, and created a resentment against the elite. For Patch to be willing to risk his life to seemingly stick it to the ruling class… it was only natural for him to quickly build a legion of fans.

In reality, the public perception of Sam Patch as a selfless, idealistic hero is probably too generous of a description. Patch was not jumping out of the kindness of his own heart or purely for politics. He was motivated by the fees paid to him for his stunts. The fame and adoration he received from his jumps only sweetened the deal. With every jump, Patch was that much more famous.

Jumping for a Living

Sam Patch’s July 1828 jump in Hoboken, New Jersey was the turning point in his daredevil career. His jumps prior to the Hoboken jump were for coworkers and neighbors who either falls-jumped themselves, or knew enough about how it worked to appreciate it from an informed point-of-view.

In Hoboken, locals weren’t accustomed to falls-jumping. They simply wanted to see someone do something thrilling—like jump from several stories. Here, Patch started the transition from inspiring local hero to a bonafide celebrity.

After Hoboken, Patch moved to upstate New York. There, he spent all day drinking in Buffalo bars, and nights on display at a dime museum. While he was on display, museum admission was reduced to a nickel, because Patch would be too drunk to do or say anything worthwhile.

On October 7th, 1829, Sam Patch pulled off his first jump into Niagara Falls, New York. He leapt 85 feet into the lower Niagara River from a platform on the edge of Goat Island. Audience turnout was low, but those in attendance loved the stunt enough for him to plan another Niagara Falls jump for October 17th.

His second jump was a sensation. Over 2,000 onlookers watched as Patch jumped 130 feet into Niagara. The crowd looked on in amazement as he disappeared under the water, then reappeared. As his fans cheered and waved white handkerchiefs in celebration, he swam to the shore, unscathed.

Viewers of the second jump were highly impressed. A reporter from the Buffalo Republican, a local paper, wrote the following about the event: ”[the] jump of Patch is the greatest feat of the kind ever effected by man. He may now challenge the universe for a competitor.”

No one else did challenge his feat.

The Death of Sam Patch

Prior to his death, Sam Patch embraced his status as a larger-than-life entertainer. He typically wore all white or white pants, which acted as the “uniform” for his jumps. He strutted around town drunk, with a pet black bear in tow. Patch’s eccentricity enhanced his legendary status, one that would follow him beyond death.

Sam Patch’s Rochester jumps were widely hyped. These were no ordinary feats, but events. On October 29, 1829, ads promoting his first jump were printed in Rochester-area newspapers. The ads stressed that “no mistake” was possible during the jump. (They also encouraged donations to Patch’s travel fund and stated that Patch’s pet bear would also make the jump.)

Per the Rochester Public Library’s record, Patch “took the bear by the collar and pushed it over the Falls into the turbulent water below.” After the bear successfully survived the fall, Patch hurled himself down the falls. The event was a success…

The donations amassed from the first Genesee Falls jump were lower than he expected. In an effort to garner more funds, he arranged for another jump at Genesee Falls. He upped the stakes with the construction and installation of 25-foot-tall platform above the natural rock ledge at the falls. With the platform, the total height of the jump was raised to 125 feet.

More ads were placed. They announced this next jump as being Sam Patch’s final jump (of the season.)

The jump was set for Friday, November 13th.

On Friday, November 13th, 1829, Patch arrived at Genesee Falls seeking glory and riches. He clambered up the platform. Like a performer standing on stage in front of a cheering crowd, he shouted a speech to the audience below:

Onlookers wondered if he was, as was usually the case, drunk. Some disputed the assumption, insisting he’d only had one shot of brandy to relax before the jump.

At first, his form was as great as always. Then, after a third of the way down, things fell apart. He “began to droop, his arms were extended, and his legs separated”, per newspaper the Evening Post.

His body disappeared below the water, like every jump before.

Except this time, he never returned to the surface.

It took months for Patch’s body to be found. While the search for his body was on, rumors abounded. Mainly, some believed that Patch wasn’t dead. In this theory, Patch must’ve faked his death by throwing a dummy down the falls, while the real man watched from the crowd. These stories persisted even after his death was confirmed.

In March 1830, his body was found seven miles downstream from his entry point into the river.

After his death, Patch’s reputation soared to new heights. Though some criticized his demise, and overall live-fast-die-young lifestyle, others revered him. Into the 1840s and 1850s, Sam Patch was immortalized as a literal character in literature, folk tales, songs, and the American imagination.

In death, he became even more of a folk icon and legend than in life. President Andrew Jackson even named his favorite horse after the jumper.

“Good people all attendance give,
And list with mournful brow,
If you have any tears to shed,
Prepare to shed them now.
Sam Patch is dead, that famous man,
We ne’er shall see him more;
He used to wear his old felt hat,
With rim all torn before.
His jacket was of iron gray,
His heart was full of glee,
They say he’s killed by jumping off
The Falls of Genesee.
Full sixscore feet they say he jumped,
And struck upon his side,
He sank beneath the roaring flood,
And thus Sam Patch he died.”

Patch is believed to be buried in an unmarked grave near Rochester.

For all of his successful jumps, including once successfully jumping the same site that ended up killing him, tragically, Patch couldn’t escape the curse of Friday the 13th.

If you found this article interesting, consider joining us on our New York Ghosts tour of New York City’s most haunted places. Our tours combine history with horror for an unforgettable experience.