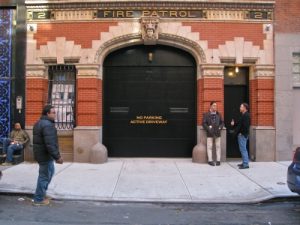 Past brothel and firehouse’s new celebrity tenant shares building with a ghost.

Greenwich Village certainly has its fair share of haunted places. But only one was both haunted and beautiful enough to catch the eye of television personality and reporter Anderson Cooper. In 2011, the CNN news anchor purchased 84 West 3rd Street for a cool sum of 4.3 million dollars1. The building, once a fire station, was now the private residence of a star. Before that, a woman named Matilda Herman, known as the “French Madam”, operated a brothel from it. “The French Madam’s” became famous for entertaining the city’s most prominent men, including lawyers, emergency workers, soldiers, and police officials.

New York’s elite has always enjoyed nocturnal pleasures, so it was a very lucrative business that Matilda ran. It is said that she earned “from one thousand to fifteen hundred dollars a month”2, for instance – quite a hefty number at the time. But a lot of Matilda’s money went towards keeping the police off her back. Besides The French Madam’s, Matilda managed several other whorehouses. Corrupt cops would only turn a blind eye to her illegal activities if she paid them a fee. “In addition to these payments, every policeman in the street received a dollar or two whenever he chose to ask for it.”3 In 1894, Matilda was brought to court to testify against these crooked collectors. Soon afterward, The French Madam’s shuttered its doors, as its owner had now fallen out the cops’ favor.

The building became a fire station in 1906 “and is one of the only three remaining fire patrol houses in the entire city (there were originally ten).”4 One interesting tidbit about Fire Station No. 2 is that although it “operated under the command of the FDNY,”5 it was the headquarters of an independent firefighting group, started by the New York Board of Fire Underwriters in 1839. This patrol focused on fighting commercial fires, rather than residential ones. Its main job, besides rescuing people, was thus to make sure no important business documents and materials were destroyed by hungry flames.

Until it closed in 2006, decades of dedicated firefighters worked, relaxed, and socialized at Fire Station No. 2. Since the FDNY’s inception, stations have played a critical role in fighting the city’s blazing infernos. That’s because they were much, much more than a place to store trucks, gear, and equipment. If you think about it, they also served as second homes to brave firemen. During the colonial era, the dearth of official firehouses made fighting flames extremely difficult. Brigades also consisted of volunteers, who, though daring, lacked training and experience. It was only in 1786 that they were organized “under the guise of the New York Fire Department”6 and in 1865 that they were compensated for risking their lives.

There are currently over two-hundred fire stations across Manhattan. America’s first public fire department was actually established in New York7, when “hand-pumped and hand-drawn engines”8 arrived from London in 1731. Five years later, the city‘s first firehouse, located right in front of City Hall, was constructed. Some of New York’s fire stations, such as Hook and Ladder Co. No. 8, date back to the 1800s. But Fire Station No. 2’s comparable youth hasn’t stopped it from accumulating some interesting stories and spectral tenants. One of its most famous ghosts is known as “Schwartz”, a forty-year-old man with grey hair and a mustache. Years after Fire Station No. 2 opened, firemen started to see him drifting through the station, wearing full, 1930s firefighting gear. Sometimes, he was spotted dressed more casually, in pants, and a red double-breasted shirt. Patrolmen would also often hear his footsteps echo around the firehouse. Schwartz was also known for knocking on the firehouse’s walls, windowsills, and railings.

They say that the dead return to haunt places which they frequented in life. A psychic brought into the building confirmed that the apparition was indeed named Schwartz9. He was probably the fireman who hanged himself from the rafters of the building’s fourth floor, sometime after World War II. It is believed that his wife’s adultery was what drove him to commit suicide. No wonder the firemen who worked at Fire Station No. 2 claim that the fourth floor is the most haunted part of the firehouse. This was where they could still feel, sometimes even see, the presence of Schwartz most strongly.

Thankfully, Schwartz was not an angry, vindictive ghost. He has never tried to harm anyone in the building, but he certainly catches people off guard! He would frequently surprise firefighters as they put on the gear and cleaned their trucks, for instance. Many claim to have felt his invisible fingers pat them encouragingly on the back, as if to wish them good luck before they rushed off to answer urgent fire alarms. Some have also seen a one hundred fifty pound dolly move from one end of a room to another on its own. Besides giving firemen his blessing, Schwartz seemed to also like to reorganize their station.

Schwartz sightings have happened all around Fire Station No. 2. People have seen him slide out of the basement’s coal chute, for example. The chute was much too small for any living adult to fit into. In 1992, one patrolman, named William Tobin10, said he saw Schwartz in the station’s storage room. Another firefighter had a particularly frightening encounter with Schwartz that same year. He woke up in his bed to see the ghost standing right over him, staring down into his eyes. But before he could recover from the shock, Schwartz had vanished.

Other notable names in history are said to haunt Fire Station No. 2. Aaron Burr, who served as New York State Senator and Vice President under Thomas Jefferson, has been seen wandering around the area. Of course, Burr is best known for being the man who shot and killed Alexander Hamilton on July 11, 1804, during their famous duel. The pair had agreed to meet “on the heights of Weehawken, New Jersey, to settle their longstanding differences”11.  Burr was never tried for the murder, so he spent the period after the shootout living in New York City. Locals have often observed a well-dressed, affluent man wearing early nineteenth-century clothing strolling along the sidewalks near Fire Station No. 2. Could this apparition be Burr, savoring his avoidance of conviction?

Perhaps paranormal activity was one of the main reasons why Cooper had been so drawn to 84 West 3rd Street in the first place. After he moved in, he invited a psychic inside to investigate its reported haunting. While there, the medium got a full taste of all of Fire Station No. 2’s spectral inhabitants. This included firemen, patrons of The French Madam, even children. The psychic felt their presence in the apartment’s library.

Besides being haunted, Fire Station No. 2 is known for its beautiful design. In fact, in 2010, it became “eligible for the State & National Register of Historic Places as an example of ‘a highly intact early 20th-century firehouse with Beaux-Arts Ornamentation.’”12 Thus, when Cooper acquired the building, he made sure to tell his architect, Cary Tamarkin, to preserve much of its fine interior elements, especially its antique, brass fire poles. Another noteworthy feature within the 8,240 square feet, red brick structure is a statue of Mercury. As the Roman god of speed, commerce, and trade, Mercury was “a perfect match for a fire agency dedicated to protecting business property.”13

Cooper opened the black doors of the ex-Fire Station No. 2 to H&M back in October. His private Greenwich home became the backdrop for the retailer’s ad, which starred David Beckham and Kevin Hart. Watch the video13, and you will get a full, inside look at the apartment’s lavishness. Though you won’t spot Schwartz among all the opulence, know that his ghost was probably present during the shoot!