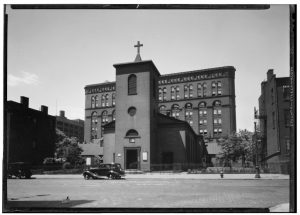 Church of Saint Luke in the Fields

Choir song and Christmas cheer… courtesy of the dead. 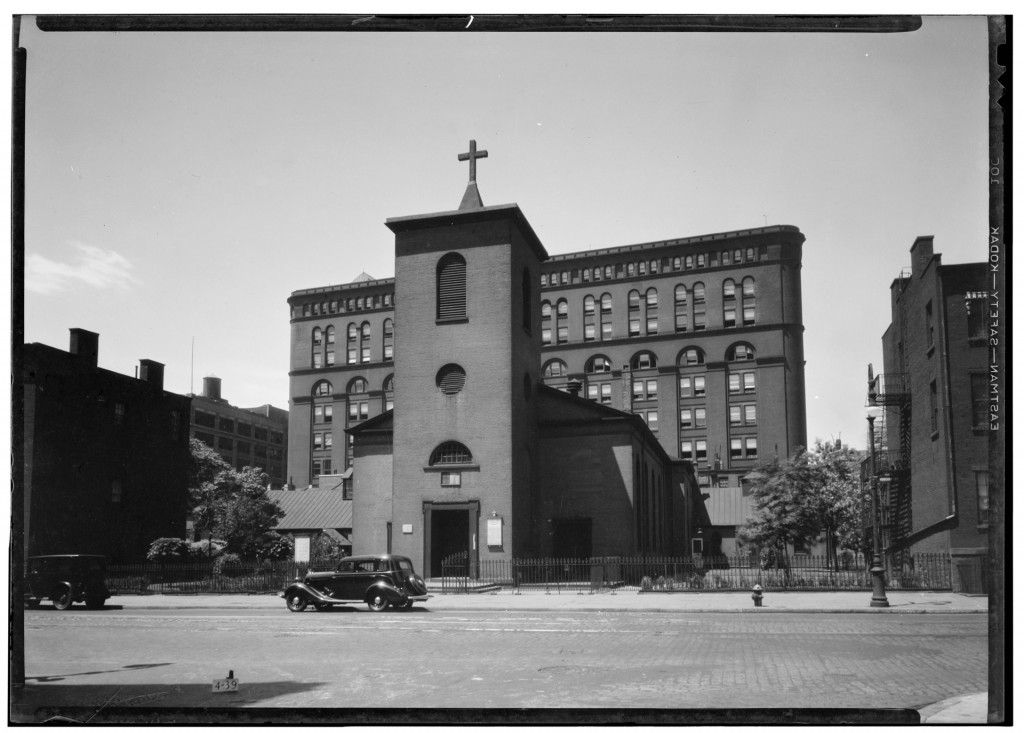 The Church of St. Luke in the Fields

If you’ve seen the film Doubt, the church on 487 Hudson Street might look quite familiar to you. The Church of Saint Luke in the Fields was used1 to shoot some scenes for the critically-acclaimed 2008 film. Like the movie’s storyline, Saint Luke’s past is very twisted. Built in the 1820s, this Episcopal church in Greenwich Village has been plagued by fires, yellow fever, HIV/AIDS… even controversy over a poem. The church has thus always been quite paranormally active. In fact, fear fans have been flocking there since the 1990s. Spirits and Spooks Haunted Tavern Tours2 kicked off at the Church of Saint Luke in 1992, for instance.

Though much of the church’s history remains shrouded in mystery, bits of its past have been pieced together. It was conceived by a small group of villagers who felt that their expanding community needed a proper place of worship.  The little school house on Amos Street was proving to be too small for congregations.  Thus, on October 22, 18203, they met at the home of Mrs. Catherine Ritter to found the nation’s first Oxford Church. The Oxford Movement, which began in England, proposed for there to be a religion that blended Anglican and Catholic traditions. The idea, also known as Tractarianism, would ironically be later criticized for being too much of a “secret society”4.

Now during the 19th century, New York City was plagued by many yellow fever epidemics. The neighborhood of Greenwich was one of the places many people sought refuge from the disease. Thus, to name the church after the patron saint of physicians and surgeons seemed very befitting. During an AIDS crisis in the 1980s, the Church of Saint Luke in the Fields would keep true to its title. In 1987, it introduced The AIDS Project of St. Luke’s5, a program which offered dinners and weekend teas to the afflicted. 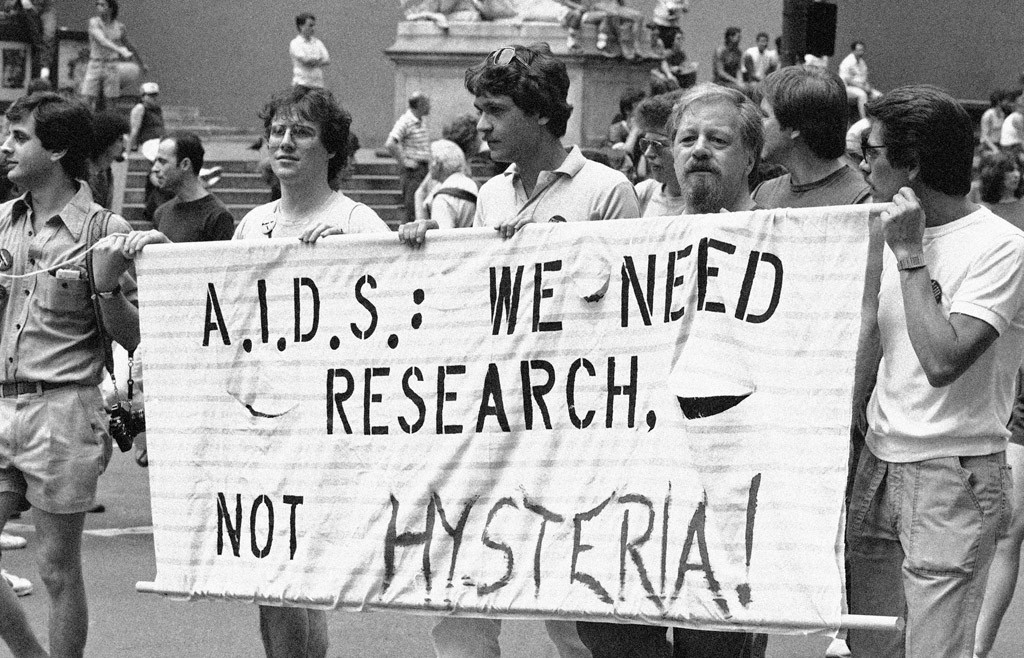 Saint Luke’s, constructed on a plot of farmland donated to the little Greenwich community by the Trinity Church, was built by James N. Wells6 for a price of about $7,5007. Its first cornerstone was laid in 1821, and it was consecrated one year later, on Ascension Day. Several rowhouses were later added to the building. The first, located on 477 Hudson Street, was erected in 1825, and served as the Church of Saint Luke’s rectory.

As the third oldest chapel in Manhattan, this Federal-style church represents an important part of American history. It was a parish of many firsts: the first in New York City “to introduce a weekly Eucharist and daily morning and evening prayer services”8, for instance. It was also among the first churches to hire a female assistant priest. (Lucia Ballantine).

By 1845, Saint Luke’s was one of the nation’s leading Anglo-Catholic houses of worship. As its number of devotees grew, so did its size and lavishness. A Victorian, Gothic-style hall was introduced to its south side in 1860, then a meeting room to its north in 1868. Isaac Tuttle9, who was the church’s rector during both additions, was especially known for his interest in helping the elderly. He had several homes built specifically for them, for instance, and the first was constructed right next to the Church of Saint Luke. 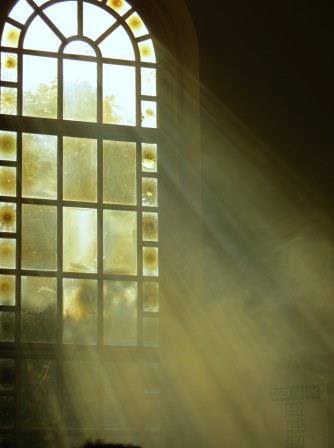 Heavenly light, streaming into the church.

Unfortunately, two fires would gut the inside of the building, one in 1886 and another in 1981. It took about six months to repair and reconsecrate the church after the first eruption of flames. After the second, which started in the basement on March 6, the Church of Saint Luke was restored by the prestigious architecture firm, Hardy Holzman Pfeiffer. “The official cause of the blaze was not determined, but Father Laughlin said there was ‘speculation about some faulty old wiring.’”10

In 1891, the Church of Saint Luke became a part of Trinity Parish. Now a chapel of a more well-endowed establishment, Saint Luke’s was bestowed with many beautiful gifts, including a serene garden at the corner of Hudson and Barrow, a small school, a children’s playground, and an ornate pipe organ “worth $200,000”11. When Trinity Parish divested itself in 1976, Saint Luke’s resumed its independence but of course got to keep these generous presents. 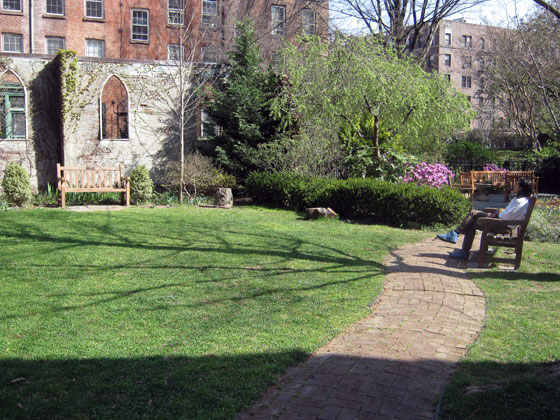 The serene garden at St. Luke’s.

Image Source: The Church of Saint Luke in the Fields

The year of 1985 was an especially significant one for the Church of Saint Luke. It was reconsecrated again, this time in its original location. A more recent history-making moment occurred in 2001, when the church adopted the slogan “Church: Art, Acceptance and a Place to Be Yourself” and introduced “an outreach program for lesbian, gay, bisexual, transgender, questioning, and allied youth from the streets.”12 Today, it continues to offer homeless members of the LBGTQA community a safe place to be themselves, as well as creative therapy workshops and warm meals.

As the church’s membership swelled, so did its graveyard’s. Among those interred in its various vaults was Clement Clarke Moore. Moore was the only child of a wealthy couple who lived in Chelsea. He began his career as a professor, but always knew that his future lay in the clergy, as his father was the second Episcopal bishop of New York. Moore thus was one of the founders of the Church of Saint Luke and also its first minister. Outside the realm of religion, Moore was most famous for penning the magical Christmas rhyme “A Visit from St. Nicholas (also known as “Twas the Night Before Christmas.”) The poem was performed for the first time at Saint Luke’s. However, some question Moore’s authorship13 and believe that Major Henry Livingston, Jr. is the one who should be credited for the classic. 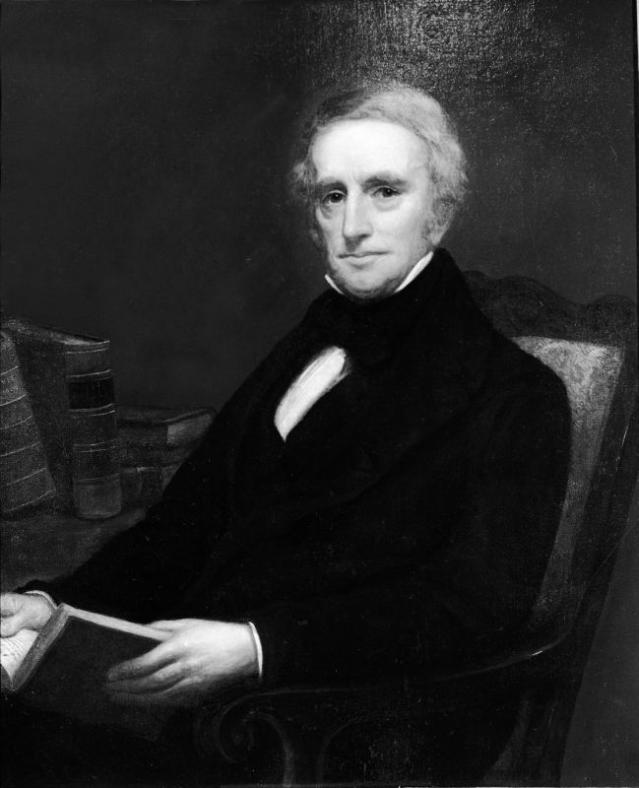 Moore was deeply devoted to Saint Luke’s, even donating his apple orchard for its construction. For awhile, he lived in a rented room at the church, in order to escape the noise and stresses of the city. After Moore died in 1863 in Newport, Rhode Island, his body was buried at his beloved Church in the Fields before being moved uptown to the Trinity Church Cemetery in 1899. It seems that even in death, Moore’s dedication to Saint Luke’s continues. His spirit still likes to return to there, to welcome worshippers and join them in prayer. In the 1980s, for example, a young woman claims to have come across his apparition. She was sitting in the church’s garden, when a faint voice called to her: “I’m going inside of the building.” Startled, she looked up, and there was Clement Clarke Moore, smiling and waving to her!

Many liken Moore’s warmth and cheery spirit to that of Santa Claus. Often, his ghost is joined by those of dead carolers, especially during the holiday season. Music and the arts have always gotten special attention at the church. Its exceptional [living] choir performs several concerts throughout the year and has even recorded a few CDs.  Acceptance into its choir of young boys and girls (“The Choristers of St. Luke’s”) has thus always been considered a huge achievement. 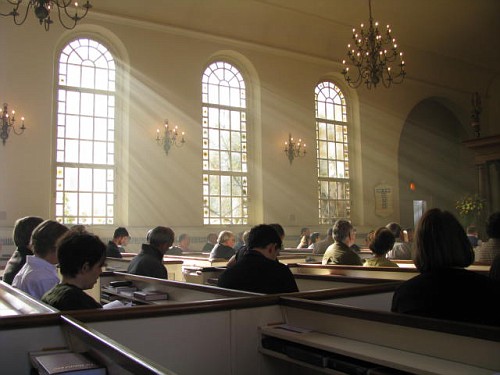 So committed to their singing duties are choir members that they continue to make music at the church, even after passing. Death hasn’t stopped them from spreading some Christmas cheer! On late, quiet weekday evenings, church members often hear the organ suddenly start playing, all by itself. Its spectral notes are usually accompanied by the sound of ringing sleigh bells and choir song. People have also seen lights flicker unexplainably at the Church of Saint Luke. 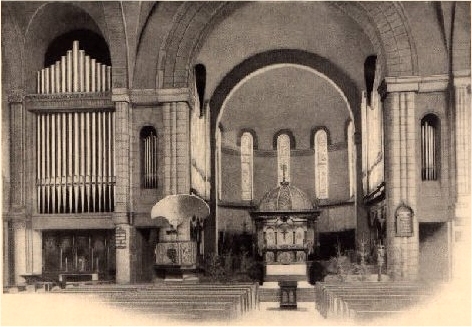 Sometimes, it’s nice to take a break from hunting for poltergeists, demons and belligerent ghosts. So if you’re ever in the Greenwich area, make sure to stop by the Church of Saint Luke’s in the Fields to encounter some friendly dead. Moore is spotted most often at the church’s parish house, so we recommend that you start your visit there! 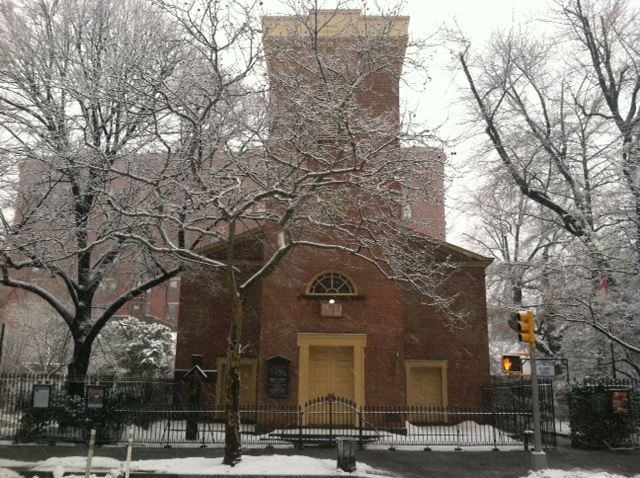