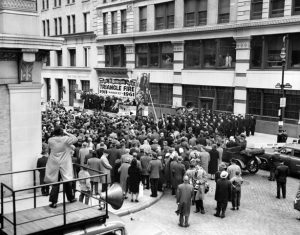 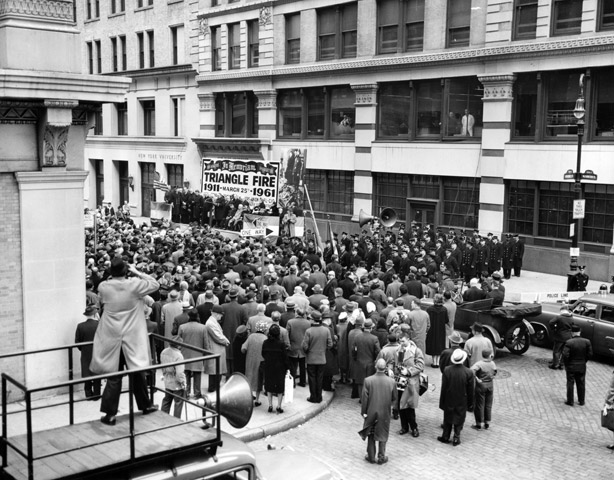 A crowd gathers to remember the horrible Triangle Shirtwaist Fire.

The fashion industry has long been criticized for its use and mistreatment of garment workers. Besides being paid well below the minimum wage, these laborers must endure unreasonable hours, callous managers, and very dangerous working conditions. Just this last May, a terrible fire1 killed over seventy people at a Kentex factory in the Philippines. Then there was the one which broke out in a Tazreen Fashions factory in Bangladesh back in 2012. Its casualties totaled to “more than 100”2. Indeed, whether from faulty wiring or negligence, fires occur often at sweatshops, both abroad and in the states. The most famous one which happened in the U.S. took place in New York City, at a building now known to New York University students as the Brown Building. 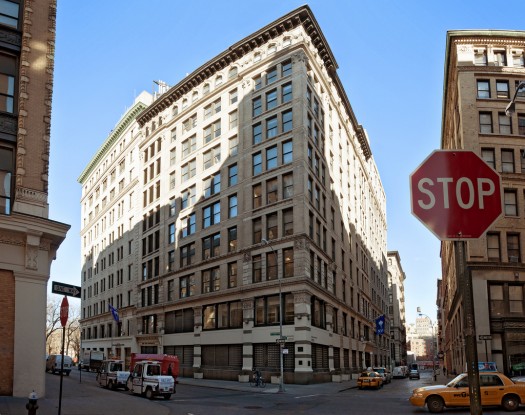 The Brown Building at NYU.

This history-making inferno, known as the Triangle Shirtwaist Fire, took place on March 25, 1911. With victims totaling up to one hundred and forty-six, the fire left behind a very haunted structure. Over the years, there have been numerous reports of ghostly sightings. The trapped female garment workers continue to replay the disaster of that horrible day. Students at the school often see the shapes of these women, leaping from upper floors to escape the phantom flames. Sometimes, they catch a glimpse of the famous kissing couple, a pair who pecked each other goodbye before jumping to their deaths from adjacent windows.

Most of the women who worked for the Triangle Waist Company were Jewish, Italian and German immigrants. Some were as young as fourteen years old. Yetta Berger, an Austrian woman who immigrated to New York City at the tender age of eighteen, was among them. All she wanted was a chance to live the American dream. Yetta was known for her elegance and beautiful, long brown hair. In 1911, she became an examiner of finished “shirtwaists,” or women’s blouses, at the factory.

Back then, there were no labor unions, so women like Yetta had to work for long hours for very little pay. On weekdays, they would clock in nine hours days, but they also had to work for seven hours on Saturdays. This meant that they were earning a mere ten dollars a week. By today’s standards, this is equivalent to making four dollars an hour! 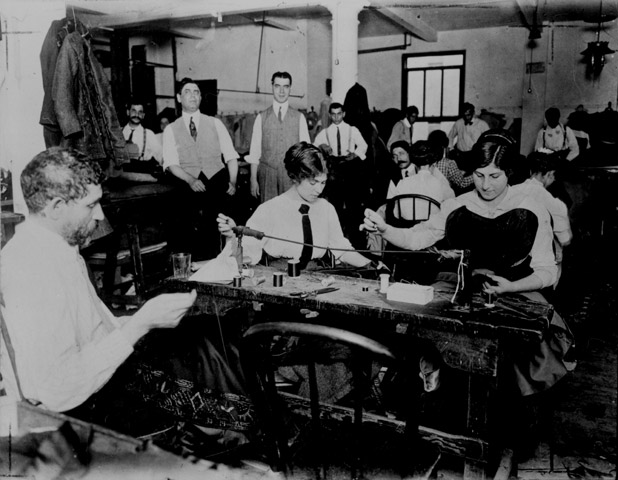 The fire is said to have started on the eighth floor, but Yetta, who worked on the ninth, could sense immediately its intense heat. “From her documented injuries and cause of death, Yetta was one of those who jumped.”3 The impact of the fall instantly broke her spine and both femurs. She lay bleeding all over the sidewalk, before finally being rescued and taken to the hospital. Unfortunately, the doctors couldn’t save her, and so she died from her ghastly wounds. Inside the Brown Building, people still see Yetta walking down the stairs and onto the street, to the same spot where she landed. She leaves behind a heavy stench of smoke and burnt flesh.

In 1916, New York University repurposed the eighth floor for classrooms and a library. Students have seen women fleeing down its hallways, after appearing out of nowhere from one of the bathrooms. Ghosts are also heard throughout the Brown Building. Their screams often shatter the night, as if they are still trying to escape from the terrible blaze. So powerful is their paranormal panic that it infects the living. So don’t be surprised if you suddenly feel the urge to flee during your visit! 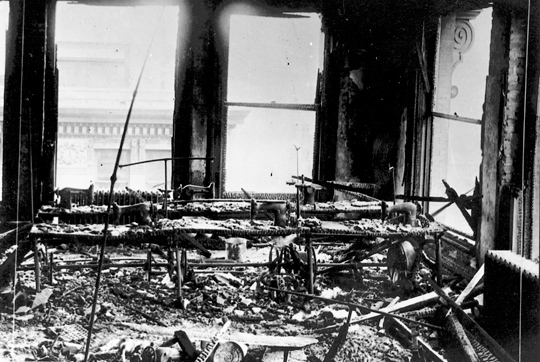 One of the floors of the factory, post inferno.

The ninth floor is considered the most haunted, because that’s where the most people died. Be careful when you look into the tall, rectangular mirror which hangs across from the elevator. Students claim that it likes to reflect both the living and the dead. You just might see a dead garment worker, still in her early 1900s garb, staring right back at you! Sometimes, her reflection flickers, as if being viewed through flames.

The main reason why the Triangle Shirtwaist Fire was so significant was that it brought to light how mismanaged and dangerous garment factories in the states were. After investigating the building, the FDNY discovered many fire traps and violations.4 Further, since no fire drills were practiced at the factory, employees were ignorant of the building’s layout. They thus did not know how to exit quickly in the case of an emergency. “Loft and factory buildings where people speaking different languages are employed should have placards in their languages telling them how to get out in case of fire,”5 noted Fire Marshall William L. Beers. With no informative signage or evacuation training, most workers were left with only one option: to jump. 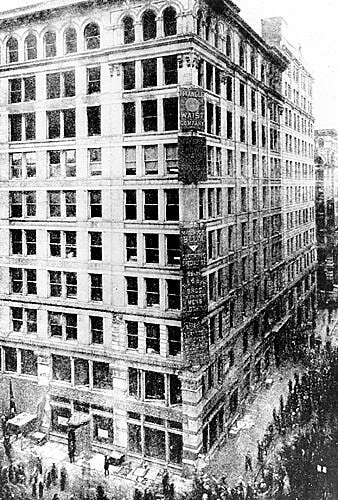 Few survived after jumping from such heights.

The Triangle Waist Company owned the eighth through tenth floors of the Asch Building, located at 23-29 Washington Place in Greenwich Village. One initial theory on what had started the fire suggested that it was “an explosion of gasoline-heated irons on the eighth floor”6, but the Fire Marshal would later conclude that it was actually an unextinguished match or cigarette butt, thrown carelessly into one of the factory’s scrap bins. Scrap bins, which were placed under cutters’ tables, held leftover, unused fabric. This highly flammable material offered the perfect kindling for a fire.

The workers on the eighth floor tried desperately to warn those on the other floors. They managed to reach the tenth floor via phone, but had no way of speaking to the poor souls on the ninth. Writes David von Drehele: “[…] most people working on the ninth floor that day did not survive at all.”7

As the fire began to spread, so did the panic. Both stairwells and elevators began to become jammed with people, making an efficient evacuation impossible. Within a few minutes, the workers’ escape options dwindled. A lucky few had managed to escape through the only operating elevator. Despite the unbearable heat, two heroic bellmen worked the car up and down the building, until the shaft finally collapsed. Some women then attempted to climb down its cables, but would only fall to their deaths on top of the cars beneath them.

Terrified, some of the remaining employees scrambled to a crowded fire escape, but the flimsy iron structure couldn’t hold all the weight. It broke, throwing twenty people nearly one hundred feet before they hit the hard, concrete pavement below. By the time rescue workers managed to extinguish the fire, one hundred and forty-one people had died. A crowd of bystanders and reporters had since gathered on the street. They watched in horror as countless charred bodies were carried out of the building. One reporter, William Gunn Shepard, wrote sadly, “I learned a new sound that day, a sound more horrible than description can picture – the thud of a speeding living body on a stone sidewalk.”8

Bodies of workers piled up on the street.

An additional five people passed away within the next few days, bringing the total number of deaths to an alarming one hundred and forty-six. The oldest victim was a mother of three, named Provideriza Parro, who was forty-three years old. The youngest were Kate Leone and “Sara” Rosaria Maltese, who were both fourteen.

The owners of the company, Max Blanck and Isaac Harris, managed to survive by fleeing to the roof when the blaze first started. The pair, who “already had a suspicious history of factory fires”9, were charged with first- and second-degree manslaughter. A lot of their decisions – i.e. not having proper sprinkler systems installed, keeping exits locked during working hours, etc. – contributed to the huge loss of lives.

Several oversights on part of the FDNY also made the situation even more disastrous. Their fire truck ladders were not long enough to reach the upper floors, for instance, and their feeble safety nets couldn’t “catch the women, who were jumping three at a time.”10 As a result, the street quickly became littered with crumbled bodies. As for the women still trapped inside, many got stuck in elevator shafts. Those who weren’t burned alive died from asphyxiation. 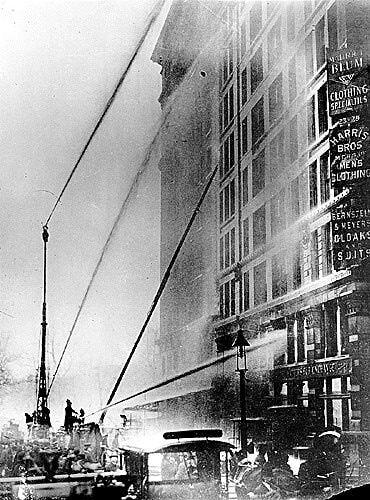 Ladders were too short to reach the upper floors.

The Brown Building has thus accumulated a lot of ghostly happenings over the years. Door handles are known to jiggle by themselves, for instance, perhaps because phantom workers are still trying to escape the terrible inferno. Their footsteps are often heard running up and down the stairwells. Lectures and study sessions are also frequently interrupted by the crackle of ghostly flames.

Ghastly things have occurred at other NYU buildings (countless suicides11 have happened at the Bobst Library, for instance.) With all the tragedies that have taken place there over the years, it’s no surprise that the university tops many “most haunted” lists. Whether you’re walking around campus or studying in the library, keep an eye out. You may be walking alongside someone who died long ago! 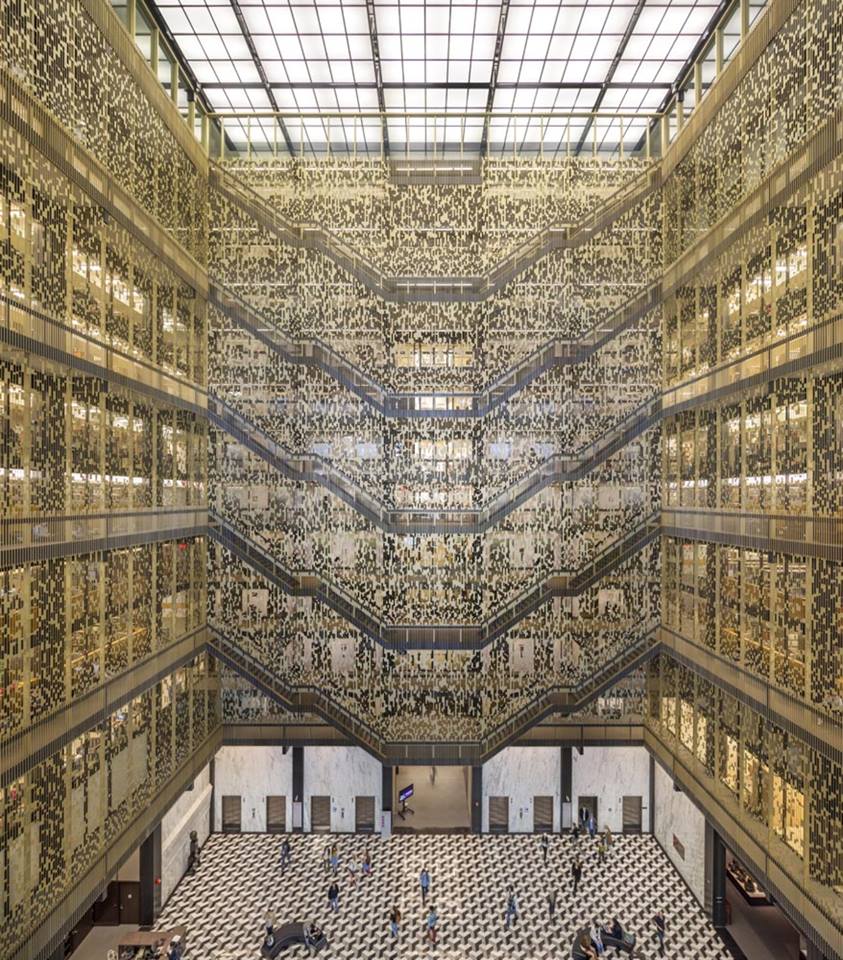 The Atrium at Bobst Library was recently updated with suicide-prevention screens.