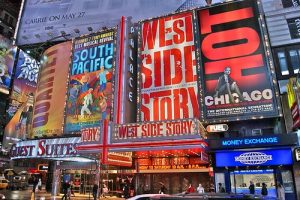 Ghost of the eccentric founder is still pinching bottoms and shaking hands at Broadway jewel.

No visit to New York is complete without a trip to Broadway. Today, the famous stretch of street that runs from 41st to 53rd (between Sixth Avenue and Ninth Avenue) encompasses forty theaters. The oldest, the Lyceum Theater, has been churning out hits and launching careers since 1903. Its most successful show, Born Yesterday, “launched the stardom of Judy Holiday”1, for instance. Due to its historic significance and exceptional Beaux-Arts design, it was also the first Broadway playhouse ever to be granted landmark status. 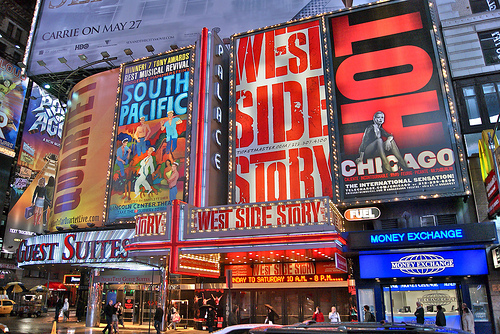 Most of Broadway’s theaters share the Lyceum’s characteristics: a handful of box office sensations, fantastic architecture, and so on. But only one can boast to be haunted: the Belasco Theater, which lies right next door to the Lyceum. Belasco stands out from the rest of the playhouse pack because the ghost of its founder, David Belasco, still roams the building!

In October 1907, “man of the century”2 David Belasco opened the Belasco Theatre’s doors to the rich and privileged at 111 West 44th Street.  Costing $750,000 (equivalent to $18.2 million now, with inflation) and featuring Tiffany glass decor and murals by artist Everett Shinn, the Belasco quickly became a legendary theater in the heart of Broadway.  The playhouse was known for its modern productions and lavish architecture, which extended from the ground floor to the penthouse duplex occupied by Mr. Belasco himself. 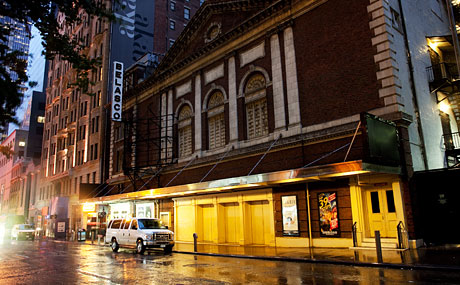 The Belasco Theater is located at 111 West 44th Street.

David Belasco’s success as a Broadway “playwright, director and theatrical producer”3 afforded him to live in extreme lavishness. There was more than enough space at his Belasco penthouse to install salons, bedrooms, dining areas, even a studio. But the living room was the apartment’s focal point. Designed like a Gothic church, this was where Belasco showcased his impressive collection of art, theater memorabilia, and erotica.

Yes, erotica! Behind all the success was an eccentric man whose inner flamboyance could be seen through the objects he owned. Thus, not only was his penthouse “bizarrely decorated”4, but also in a constant state of clutter and confusing disarray.

Now many have reported sightings of ghosts and experienced paranormal activity in New York City’s theaters. What makes the Belasco Theater so unique is that its resident ghost is a fun one to encounter. Belasco’s spirit never intentionally frightens or threatens anyone. In life, Belasco was never a malevolent being; if anything, he was more of a trickster and encouraging mentor. As a ghost, he continues to support and play pranks on the Belasco Theater’s cast and crew. Unlike the stories of so-called hauntings around New York City, this one is certainly refreshing!

Since his death at the age of seventy-seven in 1931, David Belasco has been seen in the theater’s private box during rehearsals and opening nights. He is usually alone, but sometimes the ghost of a woman in blue (dubbed the “Blue Lady”) is with him. This woman is said to be the spirit of a beautiful actress who died after falling down an elevator shaft that would take Belasco and his friends up to his penthouse.  Others believe that she is the ghost of a red-headed stripper who worked in the building when it “became a strip club called The Follies”5 in the mid-1900s. She is said to have committed suicide by hanging herself in the Belasco Theater’s basement.  Either way, there have been numerous sightings of the Blue Lady at the playhouse.

Speaking of female companions, Belasco was known for being a lady’s man. As a ghost, he still pinches the bottoms of young actresses performing at the playhouse. One story tells of a young actress who was taking a shower in her dressing room when her bathroom door was suddenly flung open. When she jumped out to yell at whoever it was, nothing was there, except for a creepy “blue glow.”6  Was it David, hoping to sneak a peek at her naked body, or the Blue Lady, sizing up her competition?

Living up to the saying “everyone’s a critic,” Belasco’s ghost especially likes to appear after shows. It’s been reported that after an exceptionally good performance, his solid figure would appear backstage, to chat with, and shake the hands of actors. But if the night didn’t go too well, Belasco would express his discontent by ransacking dressing rooms. Furniture, vases, and belongings have been discovered thrown against their walls and doors after bad performances.  Recently, the Belasco Theater has had many flops, so if the stories are true, the playhouse’s cleaning crew must have been very busy these last few years!

Many famous names have passed through the Belasco Theater’s doors since its inception. This includes Mary Pickford, John Barrymore, Ellen Burstyn, and Ralph Fiennes.  Though none of these celebrities have said whether or not they have encountered Belasco’s ghost, they’re most likely just keeping quiet. There have been many Tony Award-winning performances on the theater’s stage, so surely more than one of them has shaken the hand of Belasco himself!

You can hear and smell the presence of Belasco’s ghost at the theater as well. Mysterious noises and out-of-place smells are common in haunted places. At the Belasco Theater, non-functioning elevators are often heard going up to the now-abandoned penthouse, for instance. Multiple voices and disembodied footsteps are also heard in there as well. As for stage areas, cigar smoke has been smelled backstage, when no one [living] is lighting up.

According to The New York Times, Belasco’s ghost had been driven away when Oh! Calcutta! “debuted Off-Broadway in 1969”7.  It was an avant-garde musical comedy known for its nude scenes. Many skits thus featured “one or more performers in either a state of undress, simulating sex, or both.”9 It is said that Belasco didn’t appreciate the show’s full-frontal male and female nudity and that it was just too real for him. 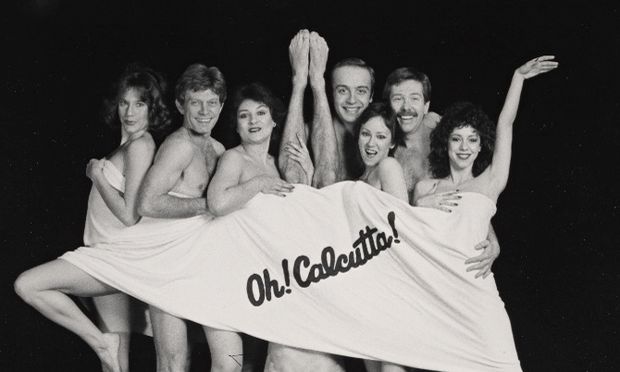 The raunchy cast of Oh! Calcutta!

To understand why the spirit of David Belasco is so influential in haunted lore in NYC, one must know how important his theater was to Broadway as a whole. The Belasco Theater was a modern marvel in the theater world.  Despite being Jewish and a great lover of women, he was nicknamed “The Bishop of Broadway”10 because of his unexplained daily priestly clothing of black suits and a clerical collar. This flamboyancy crossed over into his theater design and productions.  In 1913, Our Theaters Today and Yesterday described the theater as the “first theater to be built in an enclosed rectangular court. It is broad and shallow, seats about 1,100 persons, and allows each a clear view of the stage at such close range that opera glasses are superfluous.”11

The decorations in the Belasco Theater reflect Belasco’s “desire for theatrical intimacy.”12 No chandeliers or brackets are visible – instead, lights (flat globes of ground glass) are discreetly enclosed on the roof. Another notable feature of the playhouse’s restrained design is its absence of an orchestra.  As for the curtain, it rises in a very interesting manner, which “is announced by the sound of a muffled gong.”13

Throughout his life, Belasco was fascinated with lights and machines. He was thus also known for introducing many innovations in theater technology. The Belasco Theater had one of Broadway’s first modern light boards. With sixty-five dimmer dials, it empowered crew to easily set the mood of performances.

A strong proponent of realism in his theater, Belasco has reproduced “detailed, operational apartments, a child’s restaurant, and a laundromat on stage.”14 Although short-lived but still influential, he also used “scent design” to really bring the audience into the setting. Smells were sent through the Belasco Theater’s vents, for instance. Sometimes, actual food was cooked or coffee was brewed on the stage.

In the words of drama critic Walter Prichard Eaton, “What Mr. Belasco has done has been to write pieces for the play-house, not criticisms of life […] he has bent his mind to devise them with all possible air of probability and with all possible fidelity of pictorial setting. Especially in the latter respect, he has succeeded as no other man of our time has.”15

In 2010, the Belasco Theater’s current owners brought out its Tiffany lights and restored it to its former grandeur.  Paint was removed from its various murals, and the stained glass outside the building was cleaned and restored.  Surely this made Belasco’s spirit very happy, to say the least!  After several mid-century flops, the Belasco Theater has been renewed into what it once was: a beautiful playhouse, with respected performances across all genres.  Multiple Tony Awards have been won for the playhouse’s performances, and many famous celebrities got their start there.  Most recently, the revival of Hedwig and the Angry Inch ended its award-winning run on Broadway at the Belasco Theater. After a record of five-hundred performances, this raunchy rock musical took its “final bow”16 on September 13, 2015.